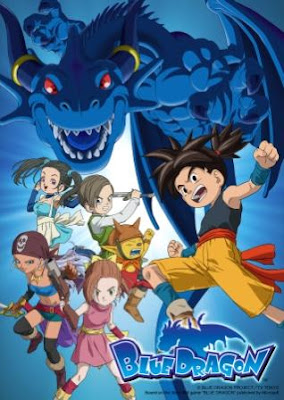 VIZ Media has announced today the availability of its popular animated series BLUE DRAGON on the iTunes® Store (www.iTunes.com) in US and Canada. As a special launch promotion, the first episode of BLUE DRAGON will be available for download for free on the iTunes Store until March 10th and can be found at www.itunes.com/tv/bluedragon.

BLUE DRAGON animated series, based on the popular Xbox 360 role playing game (RPG), is a classic adventure story of magical Shadow powers, flying air fortresses, and unbounded heroism! Brought together by fate, Seven Soldiers of Light must awaken the Shadow within themselves in time to overcome a despotic power and bring peace to their land. Their ensuing journey through a rich fantasy world is also an internal journey to awaken the great power within each of them. Journey with them into the world of BLUE DRAGON!

The Xbox 360 game “BLUE DRAGON” was developed by Hironobu Sakaguchi (the creator of Final Fantasy). The game and animated series feature memorable characters designed by Akira Toriyama, the creator of the best-selling DRAGON BALL series of manga (also published in North America by VIZ Media and featured in SHONEN JUMP Magazine). The animated series debuted in Japan on TV Tokyo on April 7, 2007 and is produced by Studio Pierrot, which is well known for its work on NARUTO and BLEACH, also licensed by VIZ Media and available on iTunes.

"We are excited to add the beloved BLUE DRAGON animation to the growing library of VIZ Media titles now available on the iTunes store.” says Ken Sasaki, Sr. Vice President of Strategy & Business Development, VIZ Media. “VIZ Media is committed to giving fans the best in animated entertainment and we are thrilled to provide the best options in delivering exciting animated content in a high quality digital way.”

For more information on BLUE DRAGON please visit the dedicated website at Bluedragon.viz.com, which currently features anime series trailers, character descriptions, artwork from the animation, and a news section that will be updated regularly with announcements regarding the anime series.