Actor Kenji Sahara, who appeared in many Godzilla movies for Toho Co., Ltd., will be this year's special guest at G-FEST XVI on Independence Day weekend in Rosemont, Illinois (outside of Chicago).

Kenji Sahara (佐原 健二 Sahara Kenji) (born May 14, 1932) is a Japanese actor. He was born in Kawasaki City, Kanagawa. His real name is Masayoshi Kato (加藤 正好 Katō Masayoshi). Initially he used the name Tadashi Ishihara before changing it when he secured the lead role in Rodan (1956). 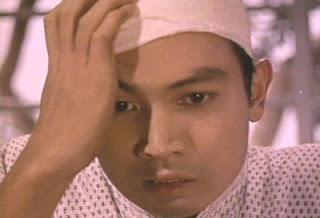 Above, Kenji Sahara in his memorable role in "Rodan."

For additional information on G-FEST XVI, go to www.g-fan.com.
By Armand Vaquer - February 25, 2009