Russell Tovey, Lenora Crichlow And Aidan Turner Return For The 3rd Season Of Being Human 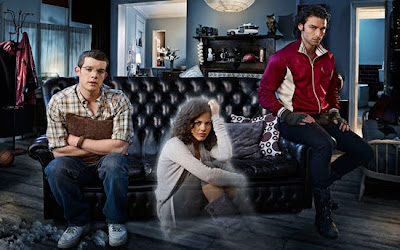 Russell Tovey, Lenora Crichlow and Aidan Turner are announced to return for a third series of critically acclaimed hit BBC Three drama Being Human, as the supernatural friends trying to live normal lives despite their unusual afflictions.

The popular drama made by Touchpaper Television, part of the RDF Media Group, will see the housemates relocate from their current home in Bristol to Wales – a move triggered by events in the dramatic climax of the second series (to be shown in February), which launched with an audience of 1.4 million.

Danny Cohen, Controller, BBC Three says: “Being Human is a wonderfully imaginative series from a brilliant team, both in front of and behind the camera. I'm proud to have this very original drama on BBC Three.”

Ben Stephenson, Controller Drama Commissioning says: “BBC Three drama is all about allowing the singular imagination of a writer the room to flourish, and Toby's extraordinary creation of an emotionally rooted yet mythic world personifies this completely. I can't wait to see where Toby and Touchpaper Television’s imaginations will take the story over another eight episodes.”

Rob Pursey, Executive Producer, Touchpaper Television says: “‘BBC Three continues to provide us with a great opportunity to make unusual, ambitious drama, and we are very excited to be able to take the new series of Being Human into fresh territory. With the new location in mind, we’ve already established some startling new storylines and characters. We’ll also aim to deliver plenty more exclusive online content in the gaps between series.”

Piers Wenger, Head of Drama, BBC Cymru Wales says: "BBC Cymru Wales is proud to have worked with Toby Whithouse and the team at Touchpaper on the last two series of Being Human and is thrilled that an editorial opportunity has arisen for them to bring the show to Wales. We look forward to continuing working with that team and Being Human’s superb cast on its third series and for many more to come.”

Being Human is written by Toby Whithouse (Torchwood, Doctor Who) and the third series will be produced by Phil Trethowan. Executive Producers are Rob Pursey, Touchpaper Television, and Beth Willis, BBC Wales.

See Also: Lenora Crichlow Talks About Being A Ghost And Being Human / Can A Werewolf, Vampire And Ghost Share A London Flat?
By Ken Hulsey at January 29, 2010