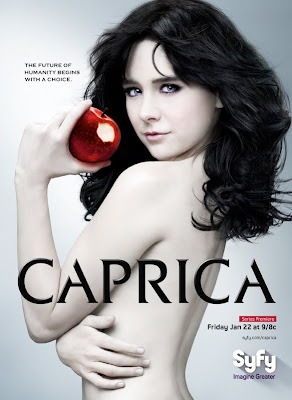 No one should ever doubt the power of advertising. The image, or images, the general public sees in relation to any given product, be it a movie, television series or box of cereal, can either make it a hit, or a dud.

How may times have you seen a trailer that got you really interested in a movie, then when you finally got to see it, it blew?

The movie may have sucked, and your were duped by a creative add, but they got your $8 didn't they.

Likewise, I have seen terrible trailers and adverts for great movies.

The only reason I am bringing this up is because of the latest advertising art that is popping up everywhere for the SyFy Channels new series "Caprica." The adds feature one of the shows main stars, Alessandra Torresani, in a very sexy pose, naked, with an apple in her hand.

Now before I had been exposed to this image on website banners and in magazines, I had seen trailers on TV for "Caprica", and to be honest, I had little to no interest in watching the show (and I am an old school 'Galactica' fan from way back).

Now, however, I have somehow developed a desire to watch it. Why? Because every time I lay eyes on the sexy image of Torresani.....I....well......It's a guy thing, okay. 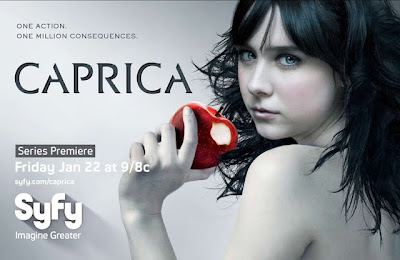 Now, the folk's over at the SyFy Channel know what they are doing. Just take a look at how the advertisement changed from this image (directly above) to the one at the top of this article.

The early version was sexy in it's own right, but it is obvious that someone thought that it needed to be kicked up a notch....bam!

So does sex sell? The short answer is 'yes'.

My male driven reaction to the add, which obviously was aimed straight at the primal urges of sci fi geeks (and I am one), is proof positive.

I didn't care about "Caprica" before, but now I do. Case closed.

Actually to be honest, the sexy photo of Alessandra Torresani actually just made me want to go on a quest to find more images of her......oh, and look up her bio. 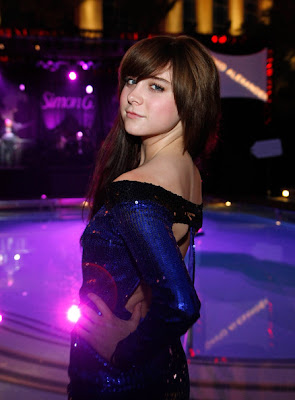 Here is Alessandra Torresani 's official bio courtesy of NBC/Universal (because I know that you are as curious as I was):
Alessandra Torresani stars opposite Eric Stolz and Esai Morales as Zoe Graystone on Syfy's much-anticipated new drama "Caprica" (named one of Rolling Stone magazine's "50 Best Reasons to Watch TV").

Torresani, a multi-talented performer, has starred on such television series as "CSI: Crime Scene Investigation," "ER," "Malcolm in the Middle," "Arrested Development," "Bones," "The Sarah Connor Chronicles," "Happy Campers" and the Joel Silver pilot "Newton", among many others.

By the time the Palo Alto, Calif. native was asked to host "WB Kid's Club" at the age of 9, Torresani was a veteran of numerous dance and athletic competitions, and had already been named a world dance champion in jazz and tap. She also achieved a black belt in tae-kwon-do.

Torresani's long string of roles on some of television's most-watched shows soon began, as well as her star turns in the feature films "Lost & Found" (opposite David Spade), "Going to the Mat" and "Baby Bedlam."

Now, I still may resist the urge to watch "Caprica", because after Torresani's image ebbs from my mind, I do still remember that the show didn't look all that great from the trailers.

Then again, it could be good huh? I mean that Torresani sure looks hot, right?