James Guymon Composes Sample Music For Empires Of The Deep 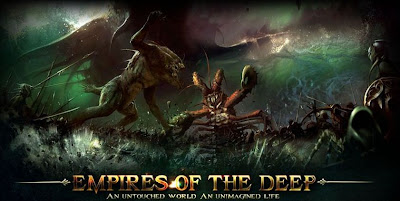 For some time now I have been posting updates for a very ambitious film project from China called "Empires of the Deep." The film, which is being produced under the direction of Jonathan Lawrence with an American and Chinese crew, is the most expensive movie to ever be shot in southern Asia.

Here is the film's synopsis:

For thousands of years, legends of beautiful mermaids have enchanted people from all over the globe. Their fascinating and mysterious world has always captured the imagination of humans. In film history, there hasn’t been a single movie that has uncovered and explored this mystical world. What secrets lurk beneath the depths? And why do beautiful mermaids seduce human men? “Mermaid Island” (.....Empire of the Deep?) is the first underwater fantasy film to unveil and answer these questions.

As you can imagine, such an undertaking has had more than its share of problems. With an international cast and crew there are bound to be communication problems, and from what has been spilling out on the website, Undead Backbrain, it can only be assumed that tensions may be coming to a head.

More on that in a moment.

First off, though, I wanted to touch on some more positive news about the film. It seems that composer James Guymon has been hired to orchestrate some 'sample' music for "Empires of the Deep." Though, Guymon has not been hired, yet, to work on the films final score, his work does give us an idea of what Lawrence and his staff are looking for musically.

Guymon has created a website that features his conceptual music for "Empires" and is presently inviting fan feed-back. Check that out here - http://vergefilms.com/james/mi/mi.html

It's some pretty good stuff I have to tell you!

Now to the "Jerry Springer" style complaining that has surfaced over at the Undead Backbrain website.

It seems that some of the disgruntled crew has chosen Robert Hood's site to air out some of their differences with Lawrence and the producer Jiang Hongyu.

Here are a few choice comments:

"Unfortunately, Jiang, the writer and money man, is pushing the whole project to the brink of destruction, due to his inexperience and by the very poor and dishonest way he is treating everybody, not honoring contracts, etc. "

"Jiang needs to be fired. He is completely irresponsible in constantly trying to force the actors and crew to jeopardize their health and safety by shooting in dangerous locations and conditions, in order to cover up for his mistakes and his lack of movie production knowledge. He is currently driving this entire production into the ground and is risking losing all the talented people he tricked into joining this production through his lies. I too wish to remain anonymous, but I can assure you that I speak from direct experience on set and for all cast and crew."

"....Jiang has got to be Ed Wood incarnate. And if he has his way this ‘would be’ summer blockbuster will be little more than a featured ditty on Mystery Science Theater."

So far, it has only been Lawrence that has posted any replies to these complaints, and he has chosen to take the high road with his comments, "....I think this is a great place (Undead Backbrain) for fans to meet and the crew to vent – When my contract ends I might exercise that luxury as well..."

It is hard to really gauge just how much any of this stuff will have on the finished product. Normally, on just about any set, there is some sort of fighting that takes place behind the scenes that people never hear about, yet quality work still manages to get done in spite of everything.

You really have to know a lot about how the Asian film industry works to get a real feel for this. Asian film productions are done in a different time frame, with different production techniques than American or European films.

Productions are normally 'rushed' with with a real desire to get the film from pre-production to post-production, and ultimately into the theater in as little time as possible.

A fine example of this are Japanese films that go from concept to finished film in a year or less.

In contrast, American and European films can take up to three years to make.

And lets not even get into the whole budget mess, Asian films cost almost nothing to make compared against the price of Hollywood productions.

So, trying to mesh these different concepts together is bound to be a nightmare for everyone involved.

If all this stuff gets worked out, "Empires of the Deep" could be spectacular!

Hey, at least it looks like the music will be good!