Karen Gillan Talks About Playing Amy Pond On Doctor Who 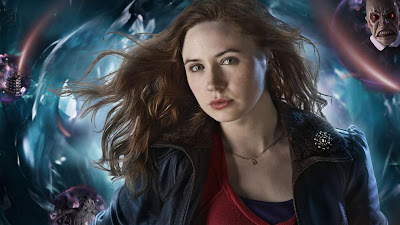 The regenerations of the Doctor are a staple part of the mythology of Doctor Who, but across the past five decades there has been another constant in the series; the changing faces of his Companion. Now, as Inverness-born Karen Gillan becomes the latest actress to join the Doctor in the TARDIS, we find out her thoughts on landing one of the most enviable roles in British television and making her mum cry...

"It was one of the strangest experiences ever; it was a really weird feeling!" exclaims Karen Gillan about her casting as Amy Pond.

"I found out on the day of my second audition with Matt, so at least I didn't have a really long wait. It just didn't feel real, and I couldn't believe it!"

But auditioning for Doctor Who is unlike any other audition for the excitable, down-to-earth actress: "I knew that the audition was for the part of the Companion, but I wasn't allowed to tell anyone about it. They even had a code name for the role because it was so top secret. The code name was 'Panic Moon'; an anagram of Companion which I thought was really clever."

Even after Karen discovered she had been cast as Amy Pond the veil of secrecy was not lifted: "I wasn't allowed to tell anyone that I got the part but my boyfriend was with me when I found out so there was rather a lot of screaming!

"I decided not to tell my parents as I didn't want to spoil the surprise but when I finally did tell them I made a special day of it and my mum took a day off work. She just couldn't believe it when I told her. She was doing the dishes and she literally stopped in her tracks and cried. She's a huge fan of the show, has been a fan for years. She even has Dalek bubble bath at home!" 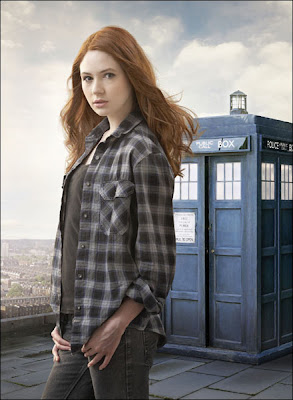 However, when the BBC announced her casting Karen was just as curious as her parents to find out what reaction she'd get from the fans.

"I couldn't resist it; I couldn't stop myself from having a look online to see what people thought," laughs Karen.

"Although after a while it all got a bit strange seeing people talking about me so I had to stop and I haven't looked since!"

Part of the interest in Karen was due to her being a relative newcomer to the industry, so how would she explain her life so far to the public?

"I'm from Inverness in Scotland, right up in the Highlands. When I was 16 I moved to Edinburgh to study acting and I stayed there for a year, then at 17 I decided to move to London to continue my acting career," she reveals. "I also did a little bit of modelling for two years which I enjoyed. I met some great people and it was a really fantastic experience."

As the countdown to the new series starts, Karen is determined not to allow the intense interest in the show to distract her.

"There is no other show that brings the same level of interest and hype or frenzy around it. I don't think it's really registered with me yet although I'm sure it will do when it gets closer to transmission. But mainly it's just great to know there are loads of people that are interested in the show and care about it. I think the best thing for me is to concentrate on doing the job well."

Karen's first day of filming the series was made even more memorable by her first encounter with the one thing which, more than any other, represents the show.

"It was great having the TARDIS there. It felt quite strange to see it on a beach in Wales; it's such a beautiful and iconic thing."

But seeing the exterior of the TARDIS still couldn't prepare Karen for the moment when she first entered the blue box, as she explains: "I was in awe of the whole thing. I'd seen the old one so much on TV and then I walked into the new one and it was breathtaking; just the sheer scale of it. It was so exciting. I thought to myself that I had to remember that moment for when Amy walked into it for the first time." 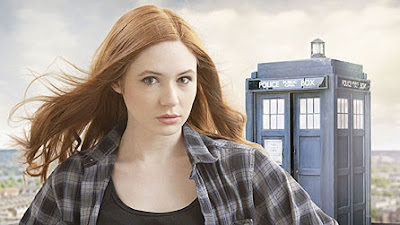 Since Doctor Who's return in 2005, there have been a number of memorable Companions for the Doctor. How does Karen feel Amy compares to those that have gone before?

"Well, for a start Steven Moffat has written a brilliant character. I do think Amy is different from previous Companions because she's very equal to the Doctor. She doesn't take his word as gospel and she's always happy to challenge him. If he tells her to do something then she won't necessarily do it, she might go off and do her own thing which can sometimes create a rift between the two of them! They are best pals though and it's a very up and down relationship because they are both very passionate people."

So is it fair to say that we will see some conflict between Amy and The Doctor?

"The Doctor is definitely an alpha male and Amy is an alpha female, so when they meet, they combust. They have quite a turbulent relationship but it's also really passionate and they care about each other. Amy can really hold her own against him and Steven's written some great one-liners. It's a great relationship."

As soon as the series started filming and Karen was pictured in the media it became clear that Amy Pond has a very unique style. So how involved was Karen in the sartorial choices?

"I think it's quite important that I feel like her when I wear the clothes. So I worked quite closely with the costume designer, Ray, and also the producers, to come up with the signature Amy look. They were generally vintage clothes, but we tried to incorporate high street styles as well because Amy is young. I think naturally there is going to be some of me in her style, as I relate to Amy and we are the same age as each other."

And Karen feels Matt Smith, as the youngest actor ever to play the Doctor, has risen to the challenge admirably.

"I think Steven said it perfectly; Matt manages to be old and young at the same time," explains Karen.

"That's the great thing about the Doctor; he has the energy and mischief of a young child as well as the wisdom, age and intelligence of someone a lot older. Also, with Matt's performance in particular, he's so believable that he isn't human. He has all these things that he does that make you really believe he is an alien or a Time Lord and you're drawn in by that."

However, as well as working with Matt, the series has also given Karen the opportunity to work with a spectacular array of guest stars.

"That's the fantastic thing about Doctor Who, you get the most amazing people coming in as guest stars. I got to work with incredible actors; Alex Kingston is back as River Song and she's a legend! I'm managing to learn so much from all of these people. I feel privileged and I'm always trying to pick up tips from them."

Is there anyone who hasn't been in the series yet that Karen would love to work with?

"As a Scot, I have to say that Billy Connolly would be really great and really funny. It would also be amazing to have someone like Judi Dench to come in and play a character. That would be mind blowing!"

If Karen were in Amy's place and could commandeer the TARDIS for a day, where would her first stop be?

"I would like to go millions of years into the future to see how people have changed and what technology we have come up with. Also, it would be really interesting to see how far humans have advanced physically. There is this theory that people are going to get really frail and skinny with big heads because they only use their brains and not their body. If I was going to go into the past then I think it would definitely be to see Elvis in concert or visit Gracelands."

There is one question which will be asked more than any other in the coming months and Karen is unequivocal in her answer; who is Karen's favourite Doctor?

See Also: Doctor Who To Make A 'Whistle-Stop' Tour Of The UK / A New Doctor - A New Logo / John Simm Promises That Tennant's Doctor Will Get A 'Brilliant Send-Off' / A Sneak Peek At The The Ultimate Monster Guide And Other Doctor Who Tidbits / 'Four Weddings And A Funeral' Scribe Richard Curtis To Write For Doctor Who / The Name Is 'Who'......'Doctor Who' / Doctor Who Black And White Action Figures - Second Doctor & Cyberman / The First Look At The Animated Doctor Who From Dreamland / Doctor Who Star David Tennant Sends 'Postcard' From America / Doctor Who - Filming Begins For The 11th Doctor / Doctor Who: The Waters Of Mars - Sneak Preview / Euros Lyn To Helm Doctor Who Movie For 2011? / Torchwood: Children Earth Doctor Who On BBC America In July / The Doctors New Traveling Companion Will Be Karen Gillan / Tennant's Doctor Making The Move From TV To Big Screen / The Doctor Makes A Surprise Appearance On The Sarah Jane Adventures / Gillian Anderson To Guest Star On Doctor Who / Doctor Who Theme Voted Best On Online Poll / Simpson And Bennett Named As Producers For Doctor Who / David Tennant And Michelle Ryan Talk About Doctor Who: Planet Of The Dead / Doctor Who - Planet Of The Dead / Doctor Who 5-Inch Wave 4 Action Figure Case / Tonight's The Night Gives One Doctor Who Fan The Chance Of A Lifetime / Doctor Who Remote Control K-9 / Lindsay Duncan Joins The Doctor For The Second Special Of 2009
By Ken Hulsey at March 25, 2010