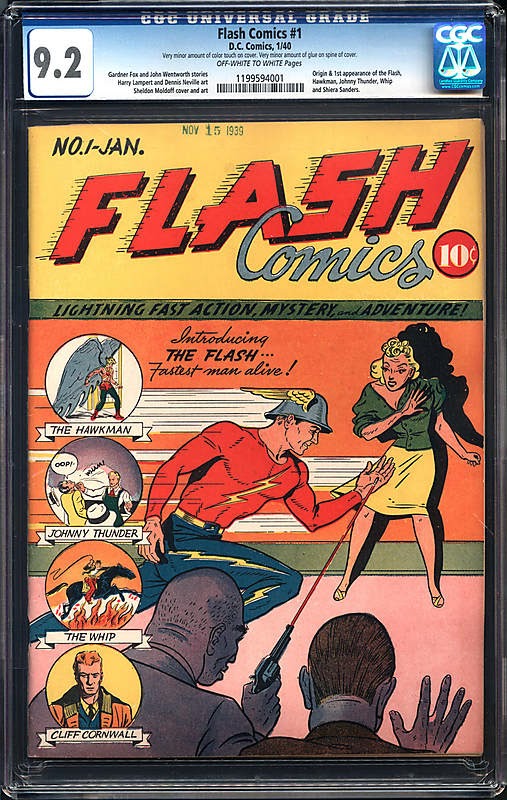 The Golden Age comics collection of a Kentucky insurance executive is expected to bring more than $1 million in an online auction that ends Tuesday.

Among the about 175 comics being sold by John C. Wise through ComicConnect are Action Comics #1, All Star Comics #1, Detective Comics #27, Marvel Comics #1, Archie Comics #1 and Wonder Woman #1. However, the jewel of the collection may be a pristine copy of 1940′s Flash Comics #1, featuring the first appearances of Jay Garrick, Hawkman and Johnny Thunder.

“This copy is in incredible high-grade condition and is the second-best copy known to exist,” ComicConnect co-owner Vincent Zurzolo told The Associated Press. The current bid for the CGC-graded 9.2 copy of Flash Comics #1 is $91,000; the 7.0 copy of Action Comics #1 is at $75,000.

The record price paid at auction for a comic book is held by a near-mint copy of Action Comics #1, which fetched $2.16 million in 2011.

Wise, 62, began collecting comics at age 12, but sold them to buy a car when he was a teenager. Among his early finds was a $200 copy of Detective Comics #27, the first appearance of Batman, which he sold just a few years later for $400. “That comic today would be worth $1 million,” he told the San Diego Union-Tribune. “That’s an example of woulda, coulda, shoulda.”