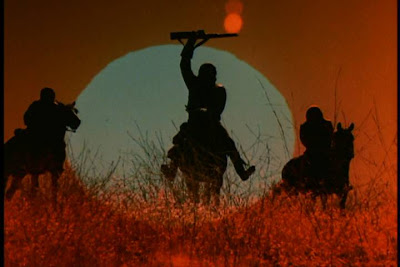 Buy The Complete 'Planet of the Apes' Tv series from Amazon for $17.99 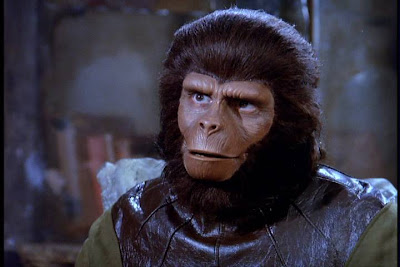 Many modern science fiction fans truly do not realize just how popular the Planet of the Apes franchise was in the early 70's. The classic film Planet of the Apes spawned four sequels, two TV series (one animated), and hordes of merchandise including dolls, playsets and books. Many consider Star Wars to be the first film to spawn such a toy boom, but "Apes" produced almost as much of a craze several years earlier. 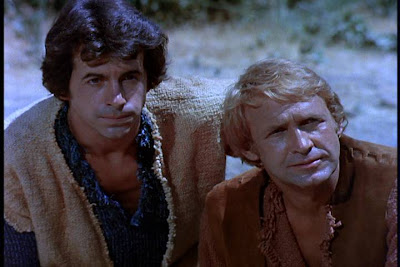 Roddy McDowall would be asked to put on John Chambers makeup one last time in the CBS networks TV adaption of Planet of the Apes. This time McDowall would not be playing Cornelius, the character made famous by the actor in the "Apes" movie series, but Galen an aide to Councillor Zaius (Booth Colman) who befriends two stranded astronauts from Earth's past played by Ron Harper and James Naughton. The series would also star popular Star Trek actor Mark Lenard (Spock's father Sarek) as the mercilous leader of the gorilla army General Urko. 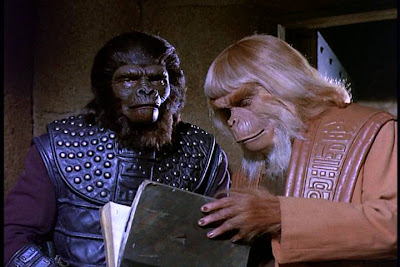 The series itself would follow the basic storyline from the first two Planet of the Apes films with some slight changes. Just like in the first "Apes" film a group of Astronauts from Earth's past crash land in the future, where mankind has destroyed itself, and apes have become the dominant species. Unlike the film series, however, the humans in this series were not mute savages, but humble slaves. It would have made for some boring TV if nobody talked. Also the original films centered around New York while the TV series took place near the ruins of San Francisco. Ultimately the series would focus on Alan, Peter and Galen running from Zaius, Urko and the Gorilla Army while meeting interesting humans who help them escape. Each new episode would introduce new friends and new enemies while working around the basic "chase" outline. 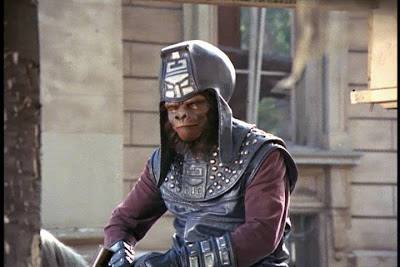 The series, despite being very well written and having a core of established actors, ultimately would suffer the same fate that Battlestar Galactica would suffer four years later. It is a known fact that the show just too expensive to produce. The makeup alone chewed up most of the allocated budget and left very little else for effects and location shots. This limited the series to shooting almost exclusively on the now famous Fox Ranch (Now Malibu State Park) that was used in the first two "Apes" movies. Average ratings versus high production costs means cancellation no matter how good a show is. Planet of the Apes was clearly a show ahead of it's time.