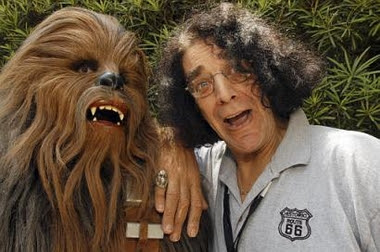 
KH - Your first Hollywood job was playing the Minotaur in Sinbad and the eye of the Tiger. Is it true you got the job because of a photoin a London newspaper?


PM - Yes, actually, the article was about people with big feet. A reporter noticed me and a much smaller mate of mine when he visited his sick mom in the hospital where I was working and photographed us walking together and took some pictures of my feet. I didn't win the big feet contest, but that eventually led to my role in Sinbad. 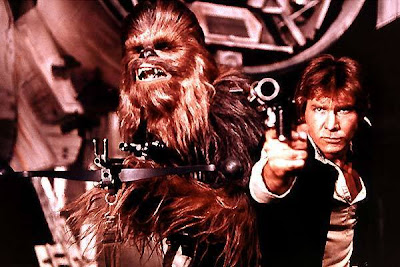 
PM - I'm not sure what the usual B-movie space opera would have been. I don't think my thinking went that deep at the time, I really just thought it was a B-movie....period. I really don't think anybody knew what we were about to become a part of.
KH - What was it like to be in the Chewbacca costume? I would imagine it was quite uncomfortable on the set, but I bet you got the last laugh in Norway filming Empire?


PM - Yes, Norway I would have been the warmest one of the lot. Otherwise, it's something that you get used to and hopefully build some tolerance for the heat. I do admit that the new Chewie suit has a water cooling system though, makes it better.


KH - What were some of your favorite moments from filming the original Star Wars trilogy?


PM - Probably the chess match. I really didn't know how to play chess and since there weren't any pieces on the board anyway, I didn't feel very handicapped. I thought the final scene of the chess match as it was composited turned out really well. Well, at the very least, you should always let the wookiee win.


KH - What were some of the worst? 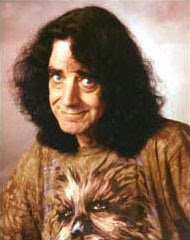 KH - You have received a lot of press recently when you married an American woman and became a US citizen. How are you adapting to life here in the States?


PM - I really like living in the States. We have a nice place, plenty of room, plenty of heat, and a pool. All good to me.


KH - In your latest film Yesterday Was A lie you once again play anominous figure. What drew you to this project?


PM - I've known Chase Masterson for many years. She's a good lady and amply persuasive. I think it will be fun.


KH - Will we finally get to hear you speak some dialog instead of grunts and growls?

KH - You recently got to reprise your role as "Chewie" in Episode 3. Was that as magical an experience as we all imagined it would be?

PM - Every bit as magical and more. The cast and crew from Lucasfilm were all pleased that I was there and this time, I had my wife to share the experience with. It was a truly awesome time for all of us.

KH - What was it like to work with George Lucas? Many people have had different takes on him. What was your impression of the man?

PM - I really, honestly like George and can tell you from personal experience that he hasn't changed much, if at all, over the years. I'm pretty sure those were the same sneakers and the same flannel shirt that he was wearing during shooting in 1976.


KH - Many fans have wondered why "Chewie" never received a medal at the end of A New Hope? Did you ever want to speak up and say "Hey where's Chewie's medal George?"


PM - I was much too timid for that, but Chewie did finally get a medal at the MTV Awards several years back, it is one of my prized possessions.


KH - There has been a lot of talk about the new Star Wars TV series. Any chance we may see Chewbacca in that?


PM - Well, I really don't know the answer to that since it is still in the development stage. My personal choice for the title of the new TV Series is:.....are you ready??......yeah, so......how about......Chewbacca vs. Boba Fett!!!! I like the sound of that, don't you? Hmm, well, I think I was day dreaming out loud.....Straight answer: I haven't got a clue what they are going to do about the TV series.
See Also: Interview - Chase Masterson / The Empire Takes Over Deal Or No Deal /Star Wars: The Clone Wars Comes To Cinemas And TV In 2008
By Ken Hulsey at April 30, 2008