The First Teaser Poster For Brian Pulido's The Graves 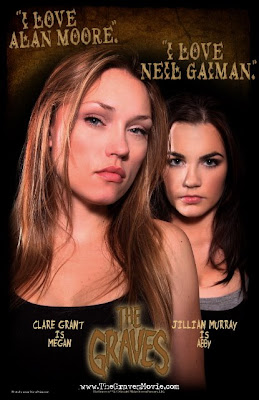 Megan and Abby Graves are inseparable sisters. Megan is a self-assured ass kicker. Abby is a caustic, Hot Topic Goth afraid of her own shadow. They couldn't be less alike, but they share a life-long obsession with comics, pop culture and rock ‘n’ roll. Simply put, they are beautiful geeks.

In a few days, Megan will start a new job in New York. To send her off in style, the sisters go on a trip to uncharted Arizona in search of kitchy roadside attractions.

Instead, they’re lured to Skull City Mine, an abandoned mine town. But Skull City is anything but abandoned -- and there’s no way out.

The sisters are now prey, forced to unleash their most primitive instincts in a desperate fight for survival against unspeakable horrors -- both human and supernatural:

When Megan suffers a mortal wound, Abby must save her sister, but to do so, she must confront her fears and unlock the mystery of Skull City alone.

Can Abby survive Skull City’s threats? Can she rescue Megan or are the Graves doomed to a fate much worse than death?

See Also: Photos And Website Info For Brian Pulido's The Graves
By Ken Hulsey at March 27, 2009