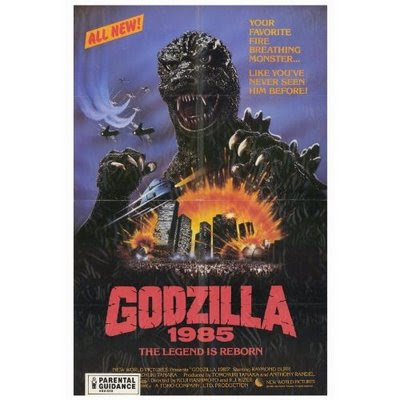 2010 will mark 25 years since the release in America of the first Godzilla movie of the second (or Heisei) series to theaters.

The summer of 1985 saw the release of the Americanized Godzilla 1985. The movie is known in Japan as Return of Godzilla. It was produced in 1984 by Toho Co., Ltd. and released in America by New World Pictures.

This new series of Godzilla movies ignores all of Godzilla’s adventures from Godzilla Raids Again (1955) through Terror of Mechagodzilla (1975). Essentially, it is a sequel to the 1954 original.

Actor Raymond Burr was tapped to reprise his role from the 1956 Americanized Godzilla, King of the Monsters! as reporter Steve Martin. To avoid confusion (or snickers) with the then-popular comic Steve Martin, Burr’s character was called either “Steven Martin” or just “Mr. Martin.”

The movie opens with a fishing trawler that gets swept near a volcanic island in a storm. As the boat closes in on the island, a menacing, enormous figure bursts (unseen to the audience, though) from the volcanic rock.

Days later, reporter Goro Maki (Ken Tanaka), while out sailing, comes across the fishing boat and he finds it in a damaged condition with seemingly no crew. However, he finds the withered corpse of a crewman and a huge sea louse, which attacks him but is killed by the sole survivor of the vessel.

The survivor relates the story of how they were swept near the island and Godzilla appeared.

Unfortunately, the Japanese government put a clamp on any news of Godzilla’s return to avoid a nationwide panic, so the reporter is unable to have his big scoop published.

As a consolation, the Maki's editor tells him to do some background on the story and sends him to see Dr. Hayashida (Yosuke Natsuki), who just happens to employ, as his assistant, the sister of the boat's survivor.

Eventually, the news of Godzilla’s return is broken wide open as he attacks a nuclear power station and feeds on the nuclear material in the reactor. But, Godzilla provides a clue to the professor as he is led back to the ocean by a flock of seagulls. Figuring that dinosaurs are distant ancestors of today’s birds, he comes to the conclusion that if a device can emulate the frequency of bird chirping, they can lead Godzilla to his doom.

Return of Godzilla marked the first performance of suit-actor Kenpachiro Satsuma as Godzilla. He would continue to play Godzilla through to Godzilla vs. Destoroyah (1995).

At the time of the release of Godzilla 1985, I was house-sitting for a friend in Canoga Park, California and on a week’s vacation. One warm summer night, after seeing off my then-girlfriend (and later spouse) home, I bee-lined it to the Van Nuys Drive-In Theater (now demolished) to catch a late screening. This was the first theatrical screening of a Japanese Godzilla movie I went to since King Kong vs. Godzilla in 1963.

Godzilla 1985 was released on August 23, 1985 to 235 North American theaters. It initially wasn’t a hit for New World, but it eventually became a minor money-maker for the company through home video sales.

Although it is somewhat dated and has corny jokes, it plays better today than many of the later entries in the series.

Godzilla 1985 has not been released on DVD as its rights ownership is somewhat in limbo (a long story, believe me). It can be found occasionally on Anchor Bay’s VHS tape through eBay and other sources. It was paired up with the short subject Bambi Meets Godzilla.