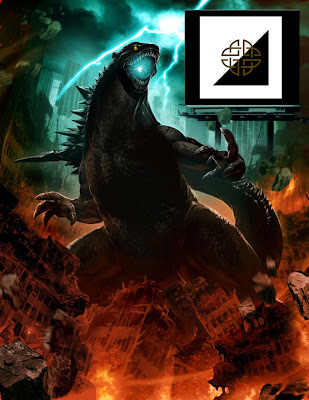 UPDATE: Indeed Legendary Pictures did hand out new t-shirts with their design for "Godzilla" at Comic Con on Saturday. (Not on Friday when I was there ........ curses!)

Many things can be determined from looking at this really cool artwork, the most important of which is the fact that the studio is going to go with the 'classic' Japanese Godzilla look, instead of trying to reinvent the monster like Tristar tried to do back in 1998.

Now if they can only find a director for the film.

Though it doesn't appear on any of the San Diego Comic Con propaganda, it appears that "Legendary Pictures" has released the first image from their upcoming "Godzilla' movie at the convention and there will reportedly be a presentation that goes along with it.

I have the image for you here on the left.

Here is a press release from Talking Dog Studios about the event:

When Warner Brothers affiliate Legendary Pictures – responsible for such critically acclaimed films as Inception, Where the Wild Things Are, The Dark Knight, 300, and Watchmen – wanted to use Augmented Reality to announce their latest film, they turned to Saskatchewan’s Talking Dog Studios to provide them with the technology to do so.

This week, Legendary Pictures is at San Diego’s Comic-Con International, the world’s biggest comics and pop culture convention, celebrating the beginning of production on their next film: “Godzilla”. Persons attending the conference will receive a t-shirt with an image of the new Godzilla, and when they look at themselves in a webcam at the Legendary Pictures tradeshow booth, they’ll see a superimposed animation of Godzilla’s “atomic breath” shooting out into the air in front of them from Godzilla’s mouth, complete with black smoke rising from the flames and the ground-shaking bellow of Godzilla’s instantly recognizable roar.

This immersive experience was designed by Talking Dog Studios, of Regina, Saskatchewan, Canada, and was supervised by Larry Monte of California’s Corporate Images. Talking Dog have been developing various AR applications for the past year, but owner Rob Bryanton sees this as a major step forward: “Augmented Reality is very open-ended, which is great because the possibilities are so wide, but it’s something that is best experienced rather than described,” says Bryanton. “With the Godzilla installation, we were able to quickly create something that our clients were immediately happy with, so we see this as a great recognition of the skillset that we’ve now developed”.

This comes at great surprise to yours truly, who visited the "Legendary Pictures" booth on Friday and saw absolutely zero items about "Godzilla" on display there.

A search of the Comic Con website reveals no such presentation by Legendary Pictures on "Godzilla" listed.

Maybe this was added today or will be added on Sunday, perhapse it was cancelled, regardless the Talking Dog Studios website has this image of the new "Godzilla", which I really love.

More on this as it develops!