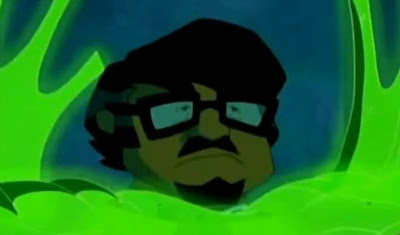 If imitation is the sincerest form of flattery, then someone over at Warner Bros Animation may very well be a huge fan of Cinema Insomnia and it's host Mr. Lobo.

Well, at least it appears that way.

In the very first episode of "Scooby-Doo! (Mystery Incorporated)",entitled "Beware The Beast from Below", which aired on Cartoon Network in early July, Fred, Daphne, Shaggy, Velma and Scooby crossed paths with a character named Professor Emmanuel Raffalo, which as you can see from the photo, bears an uncanny resemblance to the nationally syndicated horror host.

So here is the million-dollar-question, "Is Professor Emmanuel Raffalo actually Mr. Lobo in cartoon form?"

Unofficially the answer is yes, according to a source at Cartoon Network, who contacted Mr. Lobo's distributor to inform him of the homage.

Officially, well, Warner Bros hasn't fessed up to the origin of Raffalo's thick-rimed glasses, and signature facial hair as of yet. In fact, every time "Cinema Insomnia" fans try to add the information about the character's origin to Wikipedia, it gets removed.

So, for now at least, Mr. Lobo isn't going to be credited as the inspiration for this new "Scooby Doo" villain, but with continued pressure from his fans, hopefully, that may change.

This isn't the first time that a horror host has been the inspiration for a cartoon or comic book character you know. Bay Area horror host and local icon Bob Wilkins was used as the basis for a character in the "Batman" comic "Gotham After Midnight" , which was confirmed by artist Kelly Jones, but, alas, not by DC Comics.

Here is a synopsis of the episode "Beware The Beast from Below" from "Scooby-Doo! (Mystery Incorporated)":

"After being jailed for solving another mystery, the Mystery Inc. gang stumbles upon yet another mystery: A slime mutant that lives underneath the town is cocooning anyone who gets in its way. They follow the monster to the Crystal Cove caves where they find a magnifying glass-shaped locket and cocooned bodies of construction workers. Despite being warned not to continue investigating by their parents and authority figures, they steal one of the bodies and bring it to Professor Emmanuel Raffalo for studying. Meanwhile, Velma is trying to get Shaggy to be more intimate in their relationship while Shaggy is not yet ready to tell Scooby. Daphne keeps hinting her romantic feelings towards Fred who is oblivious to almost everything apart from solving mysteries and building traps. After the disappearance of Professor Raffalo, the gang discovers that cocooned material are made from the same material as Fruitmeir's Dessert, a new dessert bar that opened two months ago. Shaggy and Scooby infiltrate Fruitmeir's by posing as female servers, and Daphne stumbles across a hole that leads to the caves which go right under under the bank. Although not as planed, they catch the monster, and it is revealed to be Professor Raffalo, who discovered the caves while collecting mold spores and found out it led to the bank, so he posed as the Slime Mutant using Fruitmeir's Dessert and staged his own disappearance to lower any suspicion. When Daphne shows him the locket she found in the caves, Mayor Jones seems suspicious, but Raffalo claims to know nothing about the locket."

And here is a photo of Mr. Lobo (and his lunch): 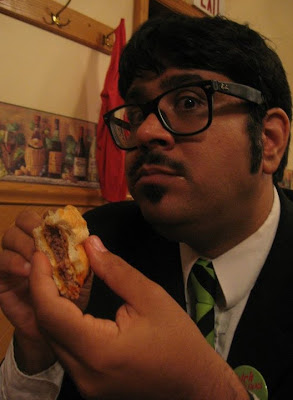