Bigfoot Returns To Comics In Dynamite's CURSE OF THE WENDIGO 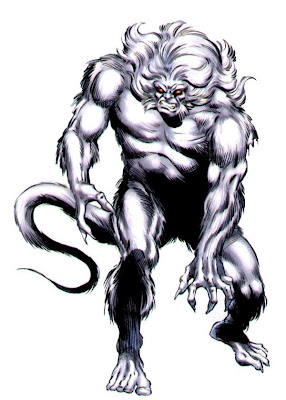 The Walking Dead's acclaimed artist, Charlie Adlard is teaming up with Dynamite Entertainment on a new horrific tale that will be adored by his fans! Teaming up with French TV and comic book writer Mathieu Missoffe comes Curse of the Wendigo! Curse of the Wendigo mixes true historical facts with fiction to create an unexpected story and distinctive atmosphere, beautifully rendered by Charlie Adlard's immense talent and enhanced by his innovative use of old war pictures within his artwork.

Set in France during WWI, Curse of the Wendigo follows a desperate alliance between isolated French and German soldiers, who must temporarily stop slaughtering each other to fight a new terrifying threat : the Wendigo, a creature preying on soldiers from both sides. Joining the search and destroy party is one of the very few Native Americans enrolled in the US Army at the time, who followed the evil trail of the once human Wendigo from his tribe's land up to the French trenches…

"There was a lot of research with Wendigo," says acclaimed The Walking Dead and Curse of the Wendigo artist Charlie Adlard. "I wanted an authenticity to the book - there had to be. So I spent a long time working on the real settings. Matt helped a great deal - he found me all these old postcards of the village where the climax is set, something I could not find on any search engine on the net. I firmly believe anyway, that if you draw any book set in the "real" world, it should have "real" things in them - not some fabrication in the artists mind. Which is another reason why I'm attracted to French comics - they seem to put a much greater emphasis on a sense of place as much as the people in their stories, unlike the US/UK, who emphasize the people over place. Just look at Asterix and Tintin books to see what I mean - fantastically drawn and rendered characters BUT set within a world that's totally real."

"Beyond the action and the supernatural," Curse of the Wendigo is also a drama, says writer Mathieu Missoffe. "It's a story about the madness of war, and about what defines basic humanity within one of the most inhumane conflict of modern history.

"Fans of the graphic arts live in a glorious age," adds Dynamite Editor Joe Rybandt. "An age where material that years ago would have never found a publishing home in the States, can now find such a home and we can all enjoy incredible graphic novels such as Curse of the Wendigo."

Charlie Adlard is best known for drawing the hit series, The Walking Dead with superstar artist Robert Kirkman! With The Walking Dead more popular than ever with a hit TV show on AMC, Charle Adlard's popularity has never been higher!

Adlard began his work in the UK on White Death with Robbie Morrison and 2000 AD series including Judge Dredd, Savage, and Armitage. Other work includes: The X-Files (for Topps); Mars Attacks! (also for Topps); Astronauts in Trouble (for AiT/Planet Lar); The Hellfire Club and Warlock for Marvel Comics; Batman: Gotham Knights and Green Lantern / Green Arrow for DC Comics; White Death for Les Cartoonistes Dangereux; Blair Witch: Dark Testaments and Codeflesh for Image; Shadowman for Acclaim Comics; and The Establishment for Wildstorm, amongst many others.

Adlard's style has evolved from what was originally fully painted artwork on Armitage, through increasing confidence as a monochrome artist, to his recent work, which uses large blocks of black ink on the page to create shadow effects much bolder than are commonly seen in comics art.

Mathieu Missoffe decided to take a shot at writing some of those twisted stories himself, after years of working in television production in France. Now a television writer and comic book creator, he devotes most of his TV work to French police procedurals, while exploring other genres such as Fantasy or Horror in graphic novels. Curse of the Wendigo is his second book, a blend of historical and supernatural elements brought to life by Charlie Adlard's first class artwork and Mambba's intense colouring. Needless to say, new television and comic book projects are in the pipe, including an upcoming TV thriller described as Jack The Ripper at the Moulin Rouge, co-written with Elsa Marpeau.
By Ken Hulsey at July 18, 2011