The Time Is Now To Save SPACE WARRIORS 2000 And Bring It To DVD! 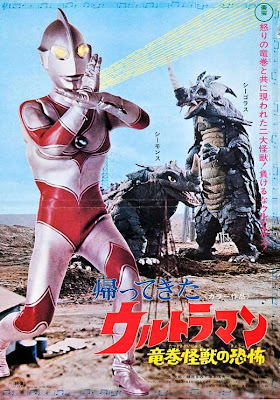 Well odds are if you are reading Monster Island News the answer is pretty obvious isn't it!

Let me tell you about a a very cool little film that you probably have never heard of called "Space Warriors 2000" which is a mish-mash of clips from old "Ultraman" episodes, and from the looks of it other Japanese monster movies, combined with new footage to create a stand alone movie.

Think of it like "Power Rangers", "Gamera Super Monster" or how Turkish sci fi films are made.

Anyway the film was produced in the mid 1980s and released to TV here in the United States. After the movie aired it disappeared into obscurity never to be seen again.

That is, until now. It seems that a distributor called Spectrum Ventures has gotten a hold of a print of "Space Warriors 2000" and has plans to possibly release it to DVD. Only one problem, the print has deteriorated to a point where it is no longer of any quality for such a release. Being that there would be both time and money issues in restoring SW2000 Spectrum is wavering on their plans.

This is where you come in.

Richard Gladman of the Cyberschizoid blog has engineered a campaign via email and Facebook to let Spectrum see just how much fan support there is for a "Space Warriors 2000" DVD release.

Here are the links:

Apparently cobbled together in the mid-eighties from footage taken from two Ultraman movies (one in fact a TV special called Ultraman Zoffy:The Ultra Warriors vs The Great Monster Army!!!) and released to American television, this is an immensely entertaining giant monster fest which is perfect for lovers of bad movies and trash cinema!

Here is a clip:

As Ultraman fans we all have a duty to persuade Spectrum Ventures to release "Space Warriors 2000" on DVD! Remember .... you have the power!
By Ken Hulsey at July 17, 2011