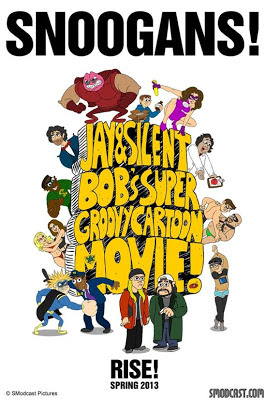 Though he’s a lot more focused on his future these days, with podcasts, TV shows, Q&A tours and a lot more planned, Kevin Smith has decided to revisit one of his best-loved creations for a new animated film. Work on Jay & Silent Bob’s Super Groovy Cartoon Movie has been underway for a while now, and Smith is ready to take it on tour.

Produced by his partner-in-snoogans Jason Mewes, the film finds stoners Jay (Mewes) and Silent Bob (Smith) realising they can no longer stomach the ever-growing weed of suburban crime. Jay & Silent Bob take on the mantles of costumed avengers Bluntman & Chronic, smashing super-villains they accidentally create. Can the Doobage Duo save their beloved Jersey ‘burbs from their new archenemies, the League of Shitters?