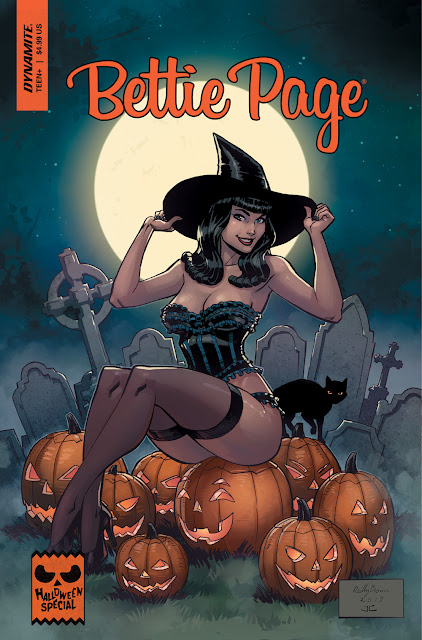 In Savage Tales: A Red Sonja Halloween Special, writer Mark Russell brings in artist Jacob Edgar (James Bond: Moneypenny) to tell an extra-length spooky story. Dearbhla Kelly and Hassan Otsmane-Elhaou also jump over from the regular series for this essential tale for fans of the She-Devil with a Sword. All underneath a striking cover from Erica D'Urso (Xena, Captain Marvel), drawing inspiration from the original Savage Tales #1.

This one-shot perfectly complements issue 9 of the ongoing series, out the same month. While that issue has Sonja returning to the Sorcerers of Wigur-Nomadene, Savage Tales flashes back to their first encounter. At this point, Sonja is not yet a legend, but a brute full of anger and ambition. Savage. Everyone's favorite fiery heroine tries to convince the sorcerers to bring her family and friends back to life.

"I saved the darkest chapter of the Red Sonja story for this Halloween Special," said writer Mark Russell. "The main series refers to an earlier visit by Sonja to the Sorcerers of Wigur-Nomadene and this tells the story of that visit and the price she paid to try to bring her dead family back to life. Jacob’s style lends itself really well to this story of dark magic and loss and I think it will make a great entry into the canon as well as a self-contained story."

"This new Sonja series has built a world that feels lived in, covered in dirt and sand and... probably some pretty bad smells. Approaching this issue, especially given that it's a dark Halloween tale, I really want to capture that feeling but also turn up the boldness," said artist Jacob Edgar. "Really push the energy, while maintaining the integrity of the world that's been established. Mark is a heck of a writer and I'm thrilled to get the opportunity to draw one of his books!"

In the Bettie Page Halloween Special, a mysterious force is hunting students at an exclusive Upstate New York college. Just the case for Bettie to investigate, and she'll be enrolling in Werewolf 101. The supermodel/superspy's chronicler David Avallone (Elvira, Drawing Blood) contributes this full length story with artist Roy Allan Martinez (Zorro: Swords of Hell). Bettie is used to men being beasts, so this issue turns that metaphor up to 11. In a bonus short story, writer Erica Schultz (Xena, Daredevil) and artist Fernando Ruiz (Archie, Die Kitty Die!) spin a yarn of aliens, classic cars and a sci-fi double feature at the drive-in theater.

The issue features a cover by fan-favorite Bettie artist John Royle (Elvira, GI Joe) and another from Reilly Brown (Deadpool, Lobo). Last year's Halloween Special was a bucket of fun and kicked off the whole next era of Bettie's adventures, so fans shouldn't dare miss this one!

"Throughout the Bettie series, I've tried my best to have some fun with classic mid-century pop cultural tropes and pitting her against a Wolfman is a natural extension of that," said writer David Avallone. "Roy Allan Martinez's style is reminiscent of some of my favorite 1970s horror artists (and his fellow countrymen) Alfredo Alcala and Nestor Redondo, but with a modern twist... so he was perfect for this story. And his rendering of Bettie Page is gorgeous and perfect. I can't wait for people to see it."

Erica Schultz added, "I'm very excited to contribute to the Bettie Page Halloween Special with Fernando Ruiz. I always knew who Bettie Page was, but it wasn't until I started writing for Dynamite that I learned she had a secret life! It's great to have the opportunity to add to that mythology!"

Savage Tales: A Red Sonja Halloween Special and the Bettie Page Halloween Special will be solicited in Diamond Comic Distributors’ August 2019 Previews catalog, the premier source of merchandise for the comic book specialty market, and slated for release in October 2019. Comic book fans are encouraged to preorder copies with their local comic book retailers. It will also be available for individual customer purchase through digital platforms courtesy of Comixology, Kindle, iBooks, Google Play, Dynamite Digital, ComicsPlus, and more! 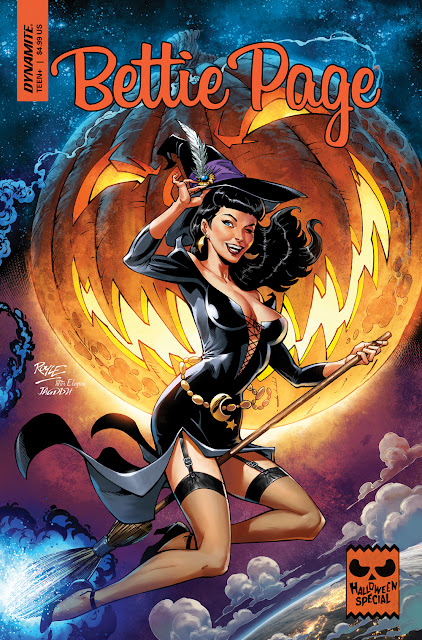 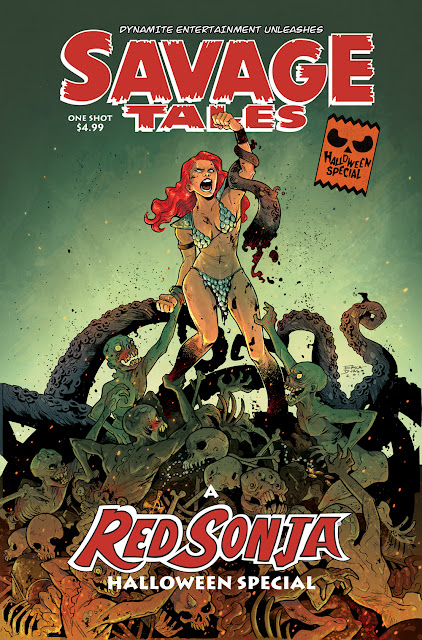 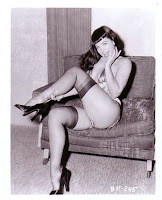 Page was born Betty Mae Page in Nashville, Tennessee on April 22, 1923, the second child of Walter Roy Page and Edna Mae Pirtle. At a young age, Page had to face the responsibilities of caring for her younger siblings. Her parents divorced when she was 10 years old. Following the divorce, Page and her sister lived in an orphanage for a year. During this time, Page's mother worked two jobs, one as a hairdresser during the day and washing laundry at night. As a teenager, Page and her sisters tried different makeup styles and hairdos imitating their favorite movie stars. She also learned to sew. These skills proved useful years later ...

BETTIE PAGE'S SECRET LIFE AS AN UNDERCOVER OPERATIVE IN 1950S HOLLYWOOD HAS BEEN DECLASSIFIED!

In this latest telling, Ms. Page is more modest than Ms. Blaise, but peels more than Ms. Emma. She out-vamps Vampirella, but she's sweeter than Honey West. She puts the mod in model, and the bangs in bang-bang. Now the world can know the truth...

"Eyes of the Gorgon":
Red Sonja comes to a town that is being attacked by a Gorgon, who is turning the townspeople to stone.
By Ken Hulsey at July 26, 2019