Flashback Friday 'To Smash A Spider' 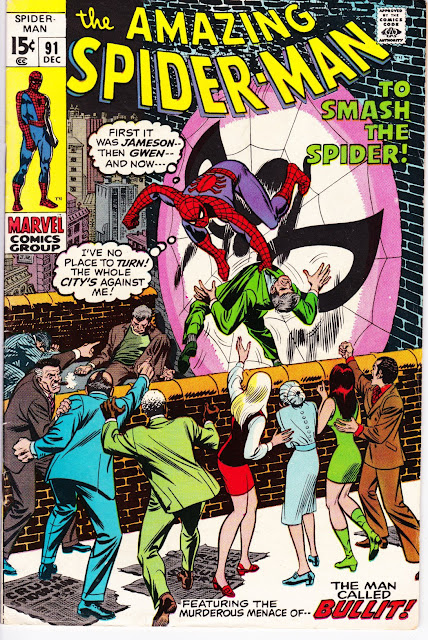 It looks like your friendly neighborhood Spider-Man is in trouble again. After the accidental death of Gwen Stacy's father (Police Captain George Stacy) a smear campaign against the web-slinger turns everyone in Peter Parker's life against him.

It is the funeral of George Stacy and everyone close to the late police captain is in attendance. Peter Parker is there to support Gwen during this time, however, he begins to consider what would happen if Gwen, who blames Spider-Man for her father's death, ever found out that Peter is Spider-Man. Also in attendance is Sam Bullit, a man who was competing with George for the job of district attorney. When Gwen later asks to aid on Bullit's campaign, it's another advantage to Bullit. Bullit then seeks the support of the Daily Bugle in exchange for this promotion, he promises to bring in Spider-Man, something which Jonah instantly signs up for even though Joe Robertson has his reservations about Bullit.

With the help of Jameson, Bullit puts on a media campaign that focuses on vilifying Spider-Man, and the press works, everyone is so frightened of the wall-crawler the streets are deserted at night. Deciding that he's pushing his luck out as Spider-Man, Peter changes back to his civilian guise. He is then confronted on the street by Bullit and his men confront Peter wanting all the information he knows about Spider-Man. When Peter refuses and likens Bullit to Adolf Hitler, he is beaten and left in the streets. Quickly recovering, Peter changes into Spider-Man and goes after them.

When he fails to track down Bullit, he finds some of Bullit's men on the street. He then chases after them and strings one of them up as a "message" to his employer. Spider-Man then heads back to his apartment. Entering he is suddenly startled when the lights are turned on by Bullit who had come there with Gwen Stacy because he knew there was a connection between Parker and Spider-Man.

Death of Captain Stacy. Spidey's battle with Doctor Octopus from the previous issue. Someone close to Peter Parker dies... And he feels responsible. Spider-Man faces off against Dr.Octopus all over new york. And when Spidey manages to defeat doc ock, doc ock hits an part of an building and the part goes down. And when the people run for their lives, Captain George Stacy sacrifices his life to save an boy. And when spidey gets Stacy, he reveals to spidey that he knew his secret idenity all along. He then tells him to take care of his daughter and then dies in Spider-Mans arms...

Harry brings Flash to Peter's apartment and forces them to work out the confusion about Gwen; Peter and Gwen reunite and attend a gala where paintings are stolen under the nose of Capt. Stacy--it is the work of the Chameleon. Spidey sets a trap for the Chameleon but fails to unmask him until he sees…Peter Parker! Reprinted in Marvel Tales # 61.

Spider-Man and Black Cat have broken into a hotel room and slept together. As Cat disappears, a newly wedded couple comes into their room. Spidey barely gets out with his costume on.