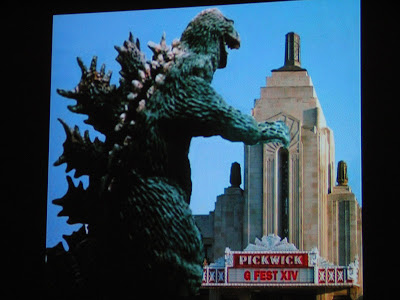 It was reported that hundreds of videos were saved from the burning building by firemen and most of what was there were duplicates. However, much of what was lost involved music recording masters from the last century from artists including Bing Crosby, Judy Garland and others.

In addition, Universal sent out this message yesterday (June 1):

Last year while assisting in the planning for G-FEST XIV's film screenings, I dealt with Mr. Ginsburg in arranging for the rentals of King Kong vs. Godzilla and King Kong Escapes. I was told at the time that they only had one archival print of each and didn't want the "heads or tails" of the films cut for mounting on a projector platter. We were told that since the Pickwick Theater did not have an older reel-to-reel projector, we would be unable to use the prints. As this was the case, that's why we had to screen the movies via DVD and still paid Universal for the screening rights.

If Mr. Ginsburg's message above is correct, then it is likely that both archival prints are lost. Naturally, Universal still has digitalized versions of both films that were used to create the DVDs. But the loss of the two archival prints would be devastating. This will be further looked into.
By Armand Vaquer - June 03, 2008