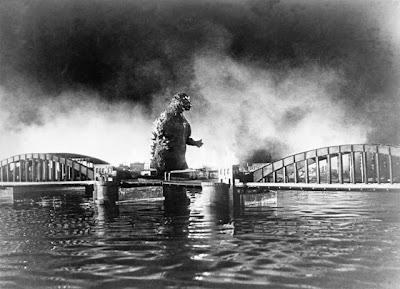 Predictably, when Bloody Disgusting.com posted that Legendary Pictures is in the planning stages of producing a new American Godzilla movie, all G-fandom became ecstatic. This is understandable.

The last movie was Godzilla Final Wars of five years ago. This movie left fans split on whether they like it or not. Some do, some don't. I find it entertaining. It was a fun flick.

At the time of Final Wars production, Toho Executive Producer Shogo Tomiyama announced that Godzilla will be on a (at least) ten-year hiatus due to slumping box office returns.

The Sony/TriStar Godzilla in 1998 was a major disappointment. It didn't look like Godzilla and it didn't act like Godzilla. G-fan Richard Pusateri coined the term GINO for the critter (GINO = Godzilla In Name Only). Each time word leaks that there may be another Godzilla from Hollywood, fans harken back to the Sony/TriStar debacle.

Wheeling and dealing in Hollywood backrooms is a constant exercise. No doubt there have been many proposals for another American Godzilla movie. The Yoshimitsu Banno Godzilla In 3D To The Max has been languishing for years. Because of this, fans have (rightly so) become jaded.

To confirm whether or not the report over Legendary's Godzilla is true, I contacted Toho Co., Ltd., Godzilla's parent company and trademark owners. I asked if the reports circulating over the Internet are true and their comment was..."No comment!" They said they are "exploring several possibilities" and are "unable to comment at this time." The funny thing is, the "no comment" comment was given with a chuckle. They did not outright say "no," "maybe," "could be," or the like. They did not say "yes" either.

Do I think there will be a Legendary Pictures Godzilla movie? While the safe answer would be, "I don't know," my impressions and/or gut feeling is leaning to "yes." I have no proof. One thing I am sure of, something is up.

If a deal is reached/has been reached between Toho and Legendary, we realistically wouldn't expect see a completed film for at least a year or two.

In the meantime, until something is announced, all we (as fans) can do is to speculate. While it is okay to become excited over this, don't become so excited that if nothing comes of this that you become deeply disappointed. Wait and see.