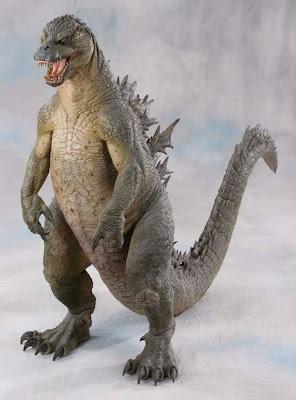 With all the buzz generated yesterday, when it was announced that Legendary Pictures, in conjunction with Warner Bros studios, were going to make a new "Godzilla" movie for release in 2012, I thought that it was the right time to start an online fan page for it.

So, I logged on to Facebook this morning and created "Godzilla 2012 - Legendary Pictures/Warner Bros (Fan Group)" for fans of the "Godzilla" movie series to be able to post their thoughts about the project and also post rumors about the films plot and potential monster(s) designs.

Just about every media outlet ran a story about the film, which has created a great deal of interest in this new American made "Godzilla" movie.

I think that it is important that we, the fans, show our support for the film, and let our voices be heard, when it comes to what we would like to see (expect) from such a film.

With any luck, the folks of at Legendary/Warner Bros, will check in on the group to see what is going on, and possibly, take some of the opinions voiced there to heart.

I don't think that either the fans, or the studios involved, want a repeat of what happened with "Godzilla 98".

From the studios statements, it is apparent that they want "Godzilla 2012" to be something more along the lines of the classic films produced by Toho between 1954-2004.

I think that is what we all want.

I encourage all of you to join the group, and become very active in it. Of course, just joining will make a statement on it's own, and participation is not mandatory, but the more people we get to post messages the better.

I think that by doing this, all of us, that is to say the mass of Godzilla fans worldwide can play some part, however possibly small, in ensuring that "Godzilla 2012" will be both successful, and a movie we can treasure for generations to come.

I occurred to me that many Godzilla fans may not be members of Facebook, so I created an independent blog so that you could join that and post comments in regards to the subjects, rumors, news and etc. that will be posted there.