Batman To Be Killed By Dad 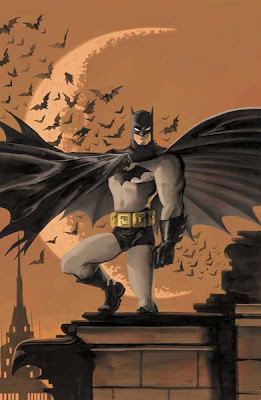 Here we go again! Batman, a.k.a. Bruce Wayne, is killed by a man claiming to be his late father, Thomas Wayne.

Thomas Wayne, along with his wife Martha, were gunned down by a small-time hood named Joe Chill in the comic books, but here it seems that Wayne faked his own death.

According to an article in Fox News.com:

The world's most famous comic book hero has breathed his last Bat breath.

Bruce Wayne — who by night is Batman — gets murdered by a man claiming to be the father he thought was dead.

In a highly controversial new comic book storyline, Bruce, who first appeared in 1939, is killed by Simon Hurt — the leader of the shady Black Glove organization.

Simon claims he is really Dr Thomas Wayne, saying he faked his own passing when Bruce was a child.

The superhero dies when he tries to stop his foe escaping by helicopter in the new comic Batman R.I.P.

Back in 1993, Superman was killed off in an epic battle with Doomsday. Recently, Captain America was killed by an assassin. Batman (Bruce Wayne) had his back broken by Bane in the "Knightfall" story line in the 1990s. Now Batman is to be killed off. It seems that DC Comics doesn't have much respect for their cash cow. Or do they? The "Death of Superman" story line boosted sales of the Superman line of comics, so DC is hoping that killing Batman will do the same trick. I really doubt that DC would kill a character whose most recent movie, The Dark Knight, was a boxoffice hit.

In the comics, a death is rarely ever permanent. It will be interesting to see how this turns out.

UPDATE (11/29/08): According to ScreenIndia.com, DC Comics is denying that Batman is to be killed off and that the news reports have the story line "blown out of proportion." See the link for details.
By Armand Vaquer at November 28, 2008