James Baack Is Conjuring Up A Bloody Bigfoot Movie In 3D

It's kinda funny, yesterday I wrote about how Bigfoot was a 'second tier' movie monster, and how the creature just wasn't getting enough credit. Well, oddly enough, I have yet another Sasquatch "splatter-fest" to tell you about.

Get the folks from "Monster Quest" down here pronto! This is the second Bigfoot sighting around here in less than a week.

Director James Baack is making a more 'hard-core' Bigfoot movie, something that he promises will be a whole lot more violent than what we are used to from a monster who is normally spotted taking leisurely strolls and being made fun off by a-holes munching on beef jerky.

Baack had this to say about his film, "The Bloody Rage of Bigfoot", "Plain and simple. We are shooting quite possibly the bloodiest film of all time."

Speaking of shooting, if you happen to be in Northern Wisconsin this summer, and you spot a harry monster, don't pull the trigger, it may be Baack's film production, which will be filming in the area.

Besides the violence Baack has come up with some other interesting 'gimmicks' that he hopes will set his film apart from the mass of Sasquatch horrors that have come before it.

The director also wants to make viewing his film to be something that goes beyond just watching a movie, "We want this to be premiered exclusively at Drive-In's. Then we will have our DVD available to the public."

"We have a local Chicago land Drive -in that is interested in showing the film. Our plan is to turn it into an "event" with a live rock band, costume contest, and some other goodies."

Besides wanting to capture the old Drive-in movie experience, he has pulled another 50s inspired movie technique from his hat, filming his movie in 3D.

Oh, and if you plan to see "The Bloody Rage of Bigfoot", bring a change of clothes or wear a rain slicker, "At this point, the film will not only be in 3-D, but we are also very seriously considering ( and figuring out a way ) to attach hoses to the screen, hooked up to pressurized tanks and actually spray the first few rows of the audience with fake blood."

Bigfoot contracts rabies from a half-dead raccoon hit by a car. As the rabies progresses, so does the deterioration of his mind. He wanders deep into the woods and encounters a Ku Klux Klan / Militia Group conducting training and that's where the body count starts. Expect a lot of guns, shootouts, explosions, and gore.

At the same time, a group of young "Goth" girls from a local high school are experimenting with black magic and through numerous attempts, they use a human sacrifice as an offering (they sacrifice the "pimp") and they successfully conjure up a hideous demon that is even MORE blood thirsty than a rabid Bigfoot. The film will climax with both monsters involved in a vicious and blood soaked battle to the death."

Rapid Sasquatches, satanic Goth Girls, human sacrifices, audiences doused with blood! Boy this one sure makes "The Legend of Boggy Creek" seem like an old fashioned church picnic doesn't it?

I don't know how good "The Bloody Rage of Bigfoot" will be, but you really have to take your hat off to Baack for pulling all the stops in creating what will certainly be an unforgettable cinema spectacle.

Baack already is on the promotional bandwagon for "The Bloody Rage of Bigfoot" as well. Here we have a few of the numerous posters that going to produced to promote the film: 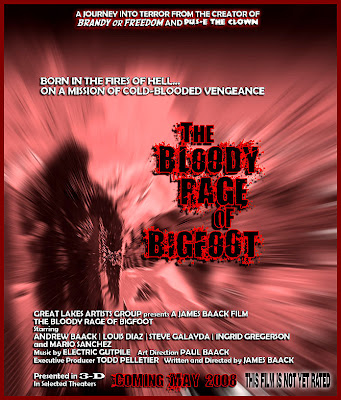 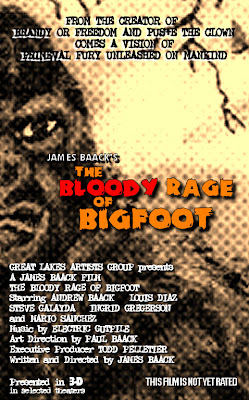 See Also: New Photos From Shawn Hunt's Bigfoot Horror The Shrieking / The Legend Of Boggy Creek (1972) / Has A Good Bigfoot DNA Sample Finally Been Found? / A Team Lead By A Russian Priest Search For Bigfoot In Siberia / Allyson Mitchell Believes The True Symbol Of Female Brains And Sexuality Is.....Sasquatch? / Does The RCMP Have A Bigfoot On Ice? / Sci Fi Orders Another Season Of Destination Truth / If Your looking For Ghosts Go To The Aokigahara Forest In Japan / Cryptozoological Figure Set / Southeastern Ohio Society For Bigfoot Investigation Holds Meatings To Discuss Sightings / Are Russian Female Bigfoot Looking For Human Mates? / Bigfoot Stalking Mormons In Houston / Nasa Photo Shows Human-like Figure On Mars / Another Knucklehead Comes Forward To Claim That He Created Pattersons Bigfoot / Recent Reports Lead To The Possibility Of A Large Bigfoot Population Near Houston BC / Monster Quest Is In Colorado Searching For Bigfoot / The Sci Fi Channel Travels Into The Unknown With Unexplained With George Noory This Month / Recent Bigfoot Sightings In BC Suggest Bear-Like Migration / Bigfoot Prints Found In Siberia
By Ken Hulsey - March 24, 2009