David Tennant And Michelle Ryan Talk About Doctor Who: Planet Of The Dead 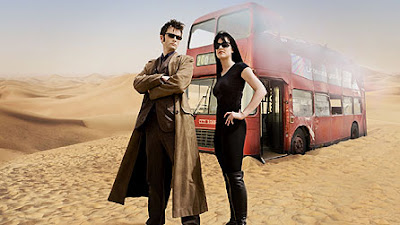 Actors David Tennant and Michelle Ryan take a few minutes to answer some questions about "Planet of the Dead", a special holiday episode of "Doctor Who", which aired this past weekend on BBC One.

When a London bus takes a detour to an alien world, the Doctor must join forces with the extraordinary Lady Christina. But the mysterious planet holds terrifying secrets, hidden in the sand. And time is running out, as the deadly Swarm gets closer...

"I think we get slightly more time to film the specials. I don't know if that's even true – we get four weeks to film an hour-long special whereas we get about two-and-a-half weeks to film a normal 45-minute episode. So we've got a little bit more time to play with but then they tend to be a bit more ambitious.

"Certainly this one was, and you know the fact that we wanted to film in an actual desert and there aren't a lot of them in south Wales.

"So we had to find somewhere in the world that we could get to that had an infrastructure that we could use to film in and that would have us, you know. Some of these deserts exist in some less than friendly regimes."

Q: Tell us about the desert vistas.

"We went to the desert and we got some incredible shots, I mean I think you'll notice it on screen that we went a long way, and that the director and the camera particularly made it count.

"I think it'll look like an alien planet in a way that nothing we've ever done before has ever quite managed, just because it is an extraordinary... it is an extraordinary sight, just miles of sand and the blue skies, the sun beating down, it is like being in another world really, so quite useful for us!"

Q: What is this episode about?

"And all of those elements kind of combine into a story that is a bit bonkers, very fast moving, very exciting, and sort of on a scope. Bigger than we've managed before, which is very exciting.

"It's very exciting having done the show for four years and still finding new stories to tell and ways of telling those stories, it's great, and it's what makes it such a great show to work on." 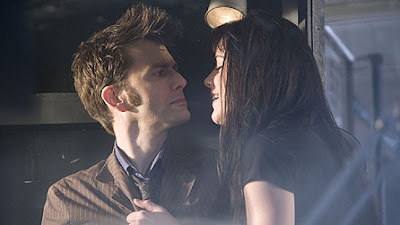 Q: Tell us about your character Lady Christina de Souza.

"Christina is a mysterious, adventure-seeking aristocrat and she is very much a loner, she's off in her own little world. And she's very daring and exciting and smart and sassy. She's a cool character."

Q: When did you first hear about the part, and why did it appeal to you?

"I first heard about the part just before Christmas and it appealed to me. I was reading lots of different scripts at the time and then I read this one and I was so engaged with the character, with her journey, and it was just a really interesting, dynamic script and few of those come along for young actresses, so I was kind of like, 'yeah, I'd like to be a part of this'.

"It's amazing, he is genuinely one of the most professional, lovely, brilliant actors I've ever worked with. And he has such a good vibe, and he gives a great energy to everyone, he's really cool.

"It's quite family-like and fun it's been such a laugh to work on. The rest of the cast, the supporting cast as well, have been brilliant, Daniel, David, Vicky and Reggie and everyone, it's been brilliant."

Q: How did you find working with the Tritovores?

"That was a bit of a shock but they're very good, the two guys who played the Tritovores with their voices, and it was cool doing all the special effects stuff where you've got the big creatures coming at you.

"It's been interesting, and I love doing all the harness and wire work – I've been hung upside down today, all day – and being dropped and bounced up and down, so it's all fun!"

Q: What's it like on set working with Lee Evans?

Q: Is there a romantic spark between your character Christina and The Doctor?

"Christina doesn't come across many men that intrigue and inspire her the way The Doctor does. He manages to show her that actually she can use her skills to help other people, and that actually it's more fun when you're part of a team rather than being a loner.

"She goes on a journey with him and I think she'd like it to be more, and he's quite closed off to that because he's been hurt in the past – he's off doing his thing and she's like, 'well, okay' and off on her next adventure!"

See Also: Doctor Who - Planet Of The Dead / Doctor Who 5-Inch Wave 4 Action Figure Case / Tonight's The Night Gives One Doctor Who Fan The Chance Of A Lifetime / Doctor Who Remote Control K-9 / Lindsay Duncan Joins The Doctor For The Second Special Of 2009 / Doctor Who Arrives In Dubai / A David Tennant Lookalike Warns About David Tennant Impostors / Dubai Bus Accident Leads To Doctor Who Re-Write / Sexy Michelle Ryan Joins The Doctor On The Planet Of The Dead / And The Eleventh Doctor Is.......Matt Smith / And The Eleventh Doctor Is........Wait For It! / Tannant Would Like To See The Doctor Sing And Dance / Doctor Who - The Next Doctor / Robert Carlyle Has A Date With A Stargate Not A Tardis / Robert Pattinson Has Possessed All The Teen Girls And Now He Wants To Be The Doctor / Freema Agyeman Talks About Doctor Who, Torchwood And Her Latest Series Survivors / 400 Fans Go Behind The Scenes Of Doctor Who And Torchwood / Beautiful New Artwork For A Proposed Doctor Who Comic Series / David Tennant Not Ruling Out Any Future Who Appearances / David Tennant Officially Announces That He Is Leaving Doctor Who / Actor Profile - David Tennant / A Special Preview Of The Doctor Who Christmas Special For Children In Need / Prince Charles Snubbed The Doctor / Fans Are Given A Rare Chance To Visit The Sets Of Doctor Who, Torchwood, And Sarah Jane / Russell T Davies Chimes In On Who Should Be Doctor Who
By Ken Hulsey - April 14, 2009