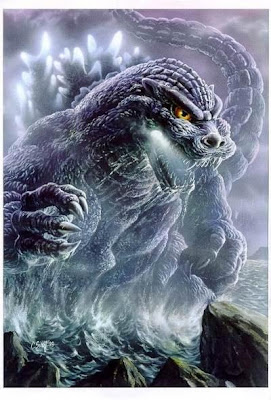 Just twenty-four hours after director Roland Emmerich publicly announced that he had no plans to make another American "Godzilla" movie, Legendary Pictures (producers of 'Watchmen' & 'Clash of the Titans') has informed the website Bloodydisgusting.com, that they are in the early stages of producing one.

In fact Legendary is in the very, very early stages of developing this brand-new "Godzilla" film, so there are little to no details as of yet. The movie studios representative did tell Bloody Disgusting that their film would 're-boot' the American "Godzilla" franchise.

From that statement it is hard to gauge whether Legendary Pictures plans to use Tristar's "Godzilla" design or go with the iconic Japanese "Godzilla". I would wager that they go with the "Godzilla" that we all know in love over "GINO."

It is also not known whether the studio will go with the infamous Godzilla 94' script that was rejected by Tristar in 1998.

In case you don't know who "Godzilla" is:

Godzilla (ゴジラ, Gojira) is a kaijū, a Japanese giant monster. His first film was Ishiro Honda's 1954 film Gojira, and since then, he has made many more appearances, and has become a pop-culture icon. In total, Godzilla has appeared in 28 films, all of which were produced by Toho Company Ltd. Godzilla has also appeared in numerous comic books, video games, and novels.

In 1998, TriStar Pictures produced a remake set in New York City, directed by Roland Emmerich and starring Matthew Broderick; the film's name was simply Godzilla. Despite negative to mixed reviews and negative Godzilla fan reaction, the film was a financial success, taking in nearly $380 million worldwide and spawning an animated television series called Godzilla: The Series.