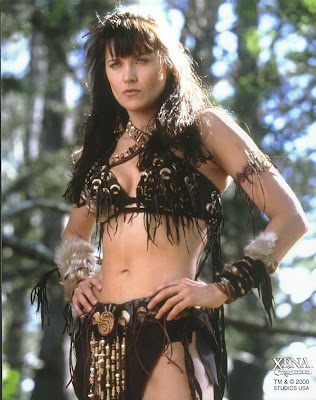 Back in 2008 actress Lucy Lawless made it public that she wanted to reprise the role that made her a fanboy....and fangirl....favorite, that of "Xena, The Warrior Princess."

Well her we are almost two years later, and Lawless is echoing the same desire to strap on the leather again. This time, however, the New Zealander doesn't think that reviving the series is the answer. No, Lawless thinks that it is time for a "Xena" movie.

The actress recently told reporters, "I love that character. I would do it if it was a movie. I doubt I would do it as a TV series. I can't see how you would make it fresh."

Just like before, Lawless understands that she isn't getting any younger, and the time may be now to get the ball rolling on any "Xena" related projects.

"By the time somebody does come up with that (a movie or new series idea) I'm just going to be too old. And I'm really sad about that. I feel like it's a completely wasted franchise."

Lawless may be feeling 'old', but you couldn't tell it by looking at her. Now, I haven't seen the show yet, but the actress is supposed to be very 'naked' in the cable series, "Spartacus: Blood and Sand", and reportedly she still looks great.

Frankly I agree with Lawless. If there are any plans for a "Xena" movie or series, then it should be sooner than later. Raimi and company certainly wouldn't want to make the same mistake the Chris Carter did by waiting too long to make "The X-Files: I Want To Believe".

Then again, it has been nine years since "The Warrior Princess" died in the final episode of the six year series.

Of course, as that episode dictated, some 20,000 human souls would be sent to Tartarus if "Xena" were to be brought back to life.

Don't know how you could make that work, if the film makers indeed wanted to make the movie 'canon' to the series.

Lets just hope that they don't go with an alternate universe "Xena"....or a clone...or something else like that.