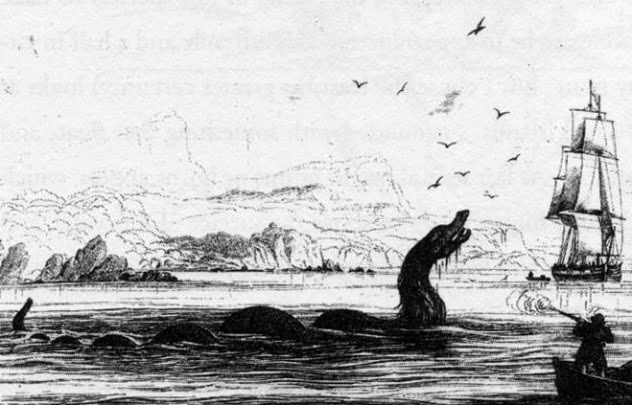 Many of you may be surprised to learn that people have been seeing something that resembles "The Loch Ness Monster" in the San Francisco Bay since the 1800s. Indeed there are hundreds of forms of marine animals and fish that call the area home and, reportedly, some form(s) of aquatic dinosaur(s) may be among their ranks.

For Bill and Bob Clark there is no doubt about it. Since their first encounter with one of these relics from the prehistoric past in 1985 the brothers have seen such creatures several times and cataloged numerous sightings from other eye witnesses.

Their first encounter came while the brothers were watching sea lions swimming in the bay. Without any warning something that resembled a Plesiosaurus (A species of aquatic dinosaur with a long neck, thick body, and flippers) shot out of the water in an attempt to snag one of the mammals.

Since that chance encounter the creature has become an obsession to find out just what exactly they witnessed.

Today, the Clark brothers have been kind enough to share the latest report of such a creature in the waters off San Francisco. The report comes from a former Marine Corps pilot that has had extensive experience flying up and down the California coast and I have seen whales, porpoise, sharks, and sea lions from the air who wishes to remain anonymous.

"I travel between Sacramento and San Francisco several times a month. On my way back from San Francisco early this afternoon on the Carquinez Bridge, I noticed a curious black object in the water just west of the bridge. I was driving east bound and looking to my left and I could see underneath and slightly west of the west bound bridge when I noticed the object. It was black, not shiny but not dull, either. It was sort of hump shaped. Understand that I only caught sight of this object for several seconds as I was driving away from it, now looking back over my left shoulder. In those several seconds I observed the following:

The object was black, smooth, and hump shaped.
Hard to judge size as there was nothing man made near it but I would estimate the object to be approximately 4’ long and 2-3’ wide..
The object did not seem to be moving.
It slowly sank vertically out of sight in the few seconds I observed it.

I noticed no horizontal movement, no splashing, no wake. I have seen porpoise and whales but never in the Straight and they are typically a grey or dark grey in color. There was no dorsal fin.
The water was fairly calm and there were no ships or boats in the straight. No wake was evident. The day was partly sunny and warm. It was about 1:15 PM."

The former pilot also added," I am fairly certain what I saw was not any sea mammal I am familiar with. I don’t really know what I saw but it was very strange, especially so close to the bridge."

Sightings of such creatures have been reported all along the California coast for decades, so what our former pilot witnessed is not without merit. It should also be noted that several California lakes reportedly have their own version of "Nessie" lurking under the surface. People have claimed to see such animals in both Elisabeth Lake and Lake Elsinore .. though the later is actually a man made lake.

If indeed living dinosaurs live off the California coast, the San Francisco Bay would be an ideal place for them to live due to the overwhelming amount of food in the area.