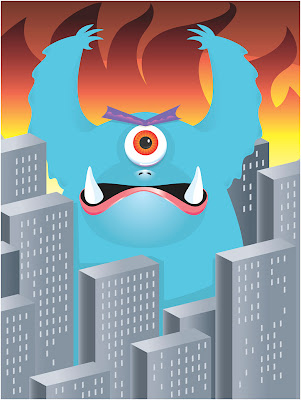 Bob Nelson (Bobzilla) is presently working on a film that is a homage to Godzilla and all his 1950s monster movie pals entitled, "Sacrifice" aka "Bob's Giant Monster Movie." At this time the film is in the very early stages of development and as the director explains he really doesn't want to give away too much about the film yet, ".....we are VERY early in pre-production on this project, so there's a lot of fluid aspects. There are also a lot of details that the production crew has decided to hold close to the heart for the time being.."

This new giant monster film is presently being targeted for a very limited theatrical release that would coincide with a larger DVD release in the Fall of 2009.

Although Nelson wants to keep almost all info on the project "hush-hush" he did divulge that the film would be live-action giant monster film and that he is presently assembling his production staff. "I can tell you that Michael Robinson is currently the Art Director and Director of Special Effects, Kent Markwart is slated to be the Director of Photography, and Brent Heffron has been selected as Lead. I am currently slated to Direct. People that would like to stay informed on our progress, as well as learn about any casting opportunities as they become available, can do so by watching the Forums for Brick Cave Media, the Production Company, www.brickcavemedia.com, and joining the free email list also at this site. "

We know that our dear friend Avery Guerra will keep track of this one for us.
By Ken Hulsey at August 27, 2008