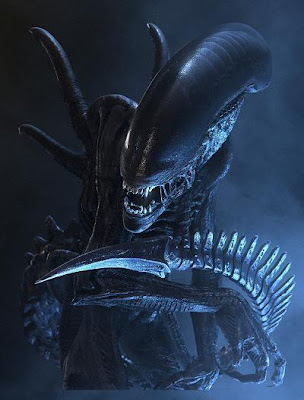 Twenty years ago this month, Dark Horse Comics revolutionized the comics industry with the release of Aliens #1, a series based on the James Cameron-directed Fox science fiction blockbuster Aliens--the acclaimed sequel to the 1979 Ridley Scott helmed sci-fi/horror masterpiece Alien, featuring the extraterrestrial nightmare imagined by artist H. R. Giger. The Dark Horse Aliens titles enjoyed not only unprecedented success for a title published by a then-small independent publisher, but opened the doors for comics based on media properties to become creative and critical triumphs as well as integral pieces of the overall story universes of these popular mainstream franchises. The stunning success of Aliens comics, and the subsequent smash-hit releases of Predator and Aliens vs. Predator (a concept first developed in comics and to this day the most successful comics series ever to be based on a licensed property), spurred more Dark Horse media-based blockbusters, including Star Wars, The Terminator, Indiana Jones, and Buffy the Vampire Slayer, and helped catapult Dark Horse to the third-largest comics publisher in North America.

“The creation of Aliens vs. Predator was the Big Bang of the current expanding universe of modern entertainment, where comics are a key creative component, not just another minor link in the licensing chain.”-- Chris Warner, Dark Horse Books Senior Editor

Now, Dark Horse is celebrating twenty years of Aliens, Predator, and AvP comics by announcing the relaunch of all three comics franchises in 2009, each coinciding with important related anniversaries. The first to hit the shelves will be a new Aliens series in May 2009, coinciding with the 30th anniversary of the original release of Ridley Scott’s Alien. In true Predator fashion -- right on the heels of the Aliens -- a new Predator series will begin in June 2009, marking the 20th anniversary of the release of the first Dark Horse Predator comic. Fast-forward to November 2009 -- the two deadliest species in the universe will once again face off in a battle of unprecedented destruction in a new Alien v. Predator series slated to coincide with the 20th anniversary of the release of the original 1989 AvP series.

“The introduction of the Aliens and Predator properties into our publishing line 20 years ago changed the way the comics industry thought about licensed material. The release of the Aliens vs. Predator series multiplied that impact by a factor of ten. We’re excited and happy to bring back these great characters in an exciting new direction. And the fans of the previous series will be shocked and amazed by what we have up our sleeve.”-- Dark Horse President Mike Richardson
By Ken Hulsey - August 05, 2008