Christopher Nolan Still Denying That There Will Be Another Batman Sequel 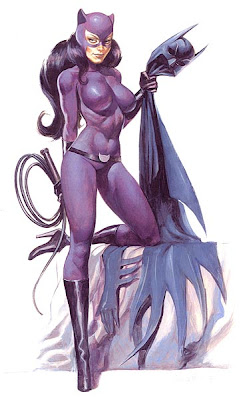 Christopher Nolan is still publicly denying that there is a sequel to "The Dark Knight" in the works. Recently he told the Los Angeles Times that making a third movie in a series is too difficult to pull off correctly and that generally movies of that type...well suck, "On a more superficial level, I have to ask the question: How many good third movies in a franchise can people name? At the same time, in taking on the second one, we had the challenge of trying to make a great second movie, and there haven't been too many of those either."

Despite Nolan's insistence that he doesn't want to be involved in a crappy "Batman" movie, rumors have been circling to the contrary.

This past August Angelina Jolie made it very public that she wanted the role of "Catwoman" in a potential new "Batman" movie. It was disclosed at that time that Jolie had been seeking advice on how to play the character from both former "Catwoman", Julie Newmar and adult actress Tera Patrick.

In even a stranger related story, it was published in People magazine that Nolan had already hand picked Cher for the role of "Catwoman."

Why all this "Catwoman" talk for a movie that reportedly isn't even on the drawing board at this point?

Nolan went on to add that he hasn't slammed the door shut on any future "Batman" films as of yet, "Is there a story that's going to keep me emotionally invested for the couple of years that it will take to make another one? That's the overriding question. It's all about the story really. If the story is there, everything is possible.."