This time, Global Warming is the catalyst for unleashing giant monsters on Japan. The melting of the southern polar ice causes a disruption in Earth's ecosystem that causes the migration of the monsters to the island nation.

The largest of the sea monsters is a beast called "Raiga", which unleashes it's "Inconvenient Truth" on Tokyo just like Godzilla, Gamera, Mothra and Rodan have numerous times.

The monster "Raiga" looks a lot like Godzilla, but hopefully not enough to get Toho's lawyers panties in a bunch.

I think that is is great to see other Japanese film companies stepping up to the plate and creating their own kaiju films while Toho sits on their monster franchise.

Although we are all still waiting for the return of the "King." 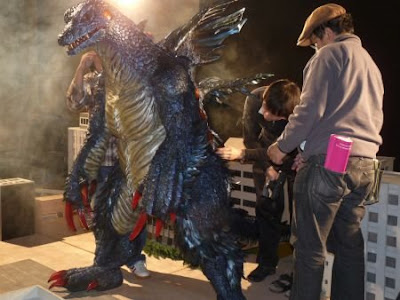