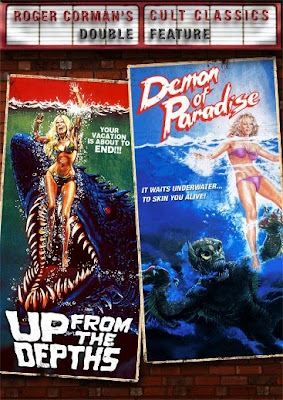 Shout! Factory and New Horizons Picture Corporation have entered into an extensive multiyear alliance to release a vast library of classic and new films from legendary producer-director Roger Corman, recipient of a 2009 Honorary Academy Award®, to the home entertainment marketplace. Under the terms of the agreement, Shout! Factory has secured the exclusive North American home entertainment rights to over 50 highly sought-after Roger Corman film properties. This announcement was made today by Shout! Factory founding partners Richard Foos, Bob Emmer and Garson Foos, and filmmaker Roger Corman.

“Roger holds an incredibly rich legacy in Hollywood. His cinematic works, spanning decades, continue to influence filmmakers worldwide. Many of his iconic films have been unavailable or long out-of-print in the home entertainment marketplace. There’s a lot of consumer interest in these films,” state Shout! Factory’s founding partners. “We’re thrilled and honored with this opportunity to work with Roger and New Horizons to bring his cinematic treasures back to their original luster and share them with movie fans.”

“We’re delighted to collaborate with Shout! Factory to make New Horizons’ historic library of films available for home entertainment,” said Corman. “We look forward to working closely with the entire Shout team for great DVD and Blu-ray releases ahead.”

Shout! Factory and New Horizons Pictures are working closely to remaster a number of great Corman titles that have been long out of print, some never-before-available on DVD and Blu-ray™. Moreover, Shout! Factory is currently producing a wide range of bonus content for special editions and double features for the launch of Shout! Factory’s Roger Corman’s Cult Classics home entertainment series.

The first titles to be made available from Roger Corman’s Cult Classics presented by Shout! Factory are the much anticipated cult thrillers Piranha Special Edition DVD, Humanoids From The Deep, Up From The Depths and Demon Of Paradise in April 2010; Piranha Special Edition Blu-ray, the memorable 1979 classic Rock ’N’ Roll High School Special Edition DVD and Blu-ray and the punk rock drama Suburbia in May 2010. Other Corman classics slated for 2010 release include Death Race 2000, Warlords Of The 21st Century, Deathsport, Forbidden World and Galaxy Of Terror, among others.

The saga of independent filmmaker-producer Roger Corman ranks as one of the most amazing motion picture success stories. Having produced more than 350 films and directed 50 others, his influence on American film goes far beyond his own energetic, creative low-budget movies. He is arguably one of Hollywood’s most gifted and masterful filmmakers.