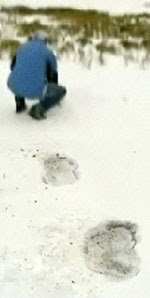 A Minnesota television station on Saturday night aired a report about a group of hunters in Siberia who stumbled upon a set of giant "humanoid" footprints. The report did not mention the length of at actual prints, but did mention a gigantic 2 meter stride between the prints. The hunters believe the tracks were left by the legendary Alma, which is a species very much like the North American "Bigfoot" or "Sasquatch."

It is interesting to note that the female anchor who presented the footage during the newscast got a real chuckle out of the story. She can be heard laughing directly after she finishes the story. Once again I am sad to report that the media, along with the scientific community, still refuse to take reports of upright walking primates seriously.

With the newscast here: Siberian Hunters Claim To Have Found Bigfoot Prints

Of course, that bogus report of a "Bigfoot" body a month or so ago didn't help the situation much, I'm afraid.

I do want to point out, that I did indeed predict that there would be some sort of Alma business coming out of Russia last week after a "hairy" sea monster was discovered on a beach by soldiers. It looks like the great "Monster Race" is on. American scientists better get their butts in gear or we will fall way behind the Ruskies!

See Also: Russian Soldiers Discover A Harry Monster On The Beach
By Ken Hulsey at October 13, 2008