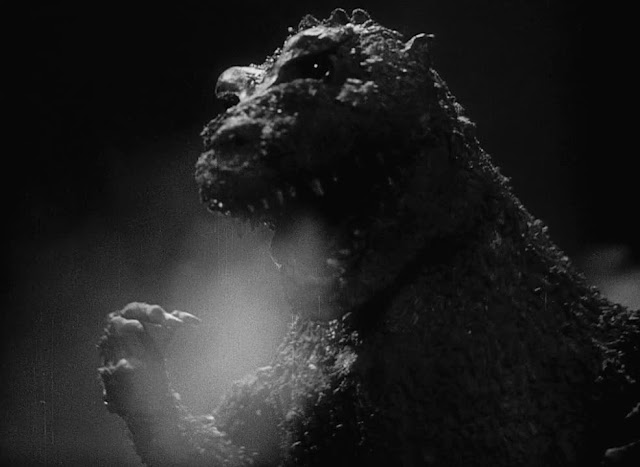 Many fans never knew that the close up shots of Godzilla in the early days was a hand puppet. Likewise Mothra, Manda, Kumonga and Kamacuras were also puppets. As a whole Eiji Tsuburaya and his special effects crew had to come up with all kinds of creative ways to portray their famous monsters due to both time limits and budget constraints.

The SYFY Wire recently published a great article about how puppets were effectively used in the Godzilla movie series:

THE REVOLUTIONARY PUPPETS OF GODZILLA, TOHO AND OTHER KAIJU MOVIES

The Japanese monster movie (kaiju eiga) is known — and frequently scoffed at — for its signature technique of suitmation: placing a stuntman inside an enormous rubber costume and turning him loose on an intricately detailed miniature cityscape.

It is important to note, however, that while this has been the go-to method for many decades, Japanese special effects artists have never shied away from using other techniques to bring their visions to life. Due to the physical limitations of suitmation, kaiju eiga filmmakers frequently supplement CGI, animatronics, separate props for feet and tails, very limited use of stop-motion animation, and even puppets to make their creatures all the more expressive on the silver screen.

Going all the way back to the original Godzilla (1954), one of the drawbacks of suitmation was inherently restricted movement in the head and neck areas. The monster costume constructed by Eizo Kaimi and Yagi brothers Kanji and Koei had been designed in a way so that the stuntman’s head would be positioned inside Godzilla’s neck — giving the creature a more inhuman shape as well as permitting the actor inside some limited visibility and ventilation through tiny holes in the throat.

The negative consequence of this design choice, however, was that the costume's neck was quite stiff — practically immobile — and thus making it difficult for Godzilla to perform actions such as snapping his jaws, an important tool in his assault toolkit. Not to mention, he could hardly turn his head without turning his entire body at the same time. The staff wanted this first iteration of Godzilla to exhibit violent, animalistic behavior, so a secondary technique would be required.


Here is a little more information from my article What Was It Like To Play Godzilla, King Kong, Rodan, Mothra ...?:

Nakajima endured wearing that 200-pound costume for the entire filming of "Gojira". Though other actors were cast to play the monster, only Nakajima could tolerate the costume, long working hours and awful filming conditions.

The filming for "Gojira" took place in the summer of 1954, which would be one of the hottest on record in Japan. Since the stages at Toho had no air conditioning and because Nakajima had to wear that heavy costume, the production was moved from a normal shooting during the day to a five pm to five am schedule. According to the actor "The crew often times said that the shooting schedule was the real Gojira (Monster)."


Let's get back to the SYFY piece:

To counter the problem, a half-body puppet was assembled. Built at a much smaller scale and used primarily in close-ups, its head and neck could be operated by hand, providing much more expressive movement than what was attainable with the suit. Now Godzilla could tilt his head in various directions as well as seize objects with his mouth. (In addition, the arms were electronically controlled with cables, helping maintain the illusion of a living creature.)

Semblance to the suit was spotty at best, but the puppet was nonetheless capable of performing actions the staff wanted, such as Godzilla lunging at the Hattori Clock Tower, biting train cars, and tearing down the NTV tower with his teeth. Under Koichi Kawakita's supervision in the 1990s, Godzilla costumes garnered internal mechanisms permitting limited head movement (tilting and swiveling), but in the beginning, filmmakers depended on ingenuity with secondary techniques to make up for the physical shortcomings of suitmation.

The 1954 puppet also came in handy when depicting Godzilla’s signature atomic breath. As the schedule did not permit sufficient time to fully animate every instance of the breath on film, all close-ups of this fiery weapon were accomplished with a water nozzle installed in the puppet's mouth. When enhanced with proper lighting, Godzilla appeared to be spitting a white-hot, explosive vapor.

Many films —and many monsters — have come since the original Godzilla, oftentimes retaining the supplement of partial-body puppets for close-ups, though the staff frequently expanded their efforts to include full-body props.

For instance, some shots of Rodan in Ghidorah the Three-headed Monster (1964) were pulled off with a puppet that was equipped with motorized wing movement. This allowed more convincing flapping motions than what could be achieved with a costumed actor and piano wires hooked to the wings. More recent films such as Godzilla 2000: Millennium (1999) and Godzilla, Mothra, King Ghidorah: Giant Monsters All-Out Attack (2001) occasionally resort to puppetry for tight shots of monsters gnawing and biting, reducing the chances of damaging the more elaborate (and expensive) suits.


Let me interject here. Not only was it expensive, it was down right dangerous as well. Here is an excerpt from my article that mentions a couple of times when suit actor Haruo Nakajima was injured:

As the years kept coming so did the monster roles for Nakajima. Next came "Rodan" then "Varan" and then "Mothra". The filming was long, hard and very dangerous. Nakajima admits that he was injured in some way or another on every single production. On the set of "Varan" the actor was hurt very seriously when a miniature building blew up underneath him. Despite being in severe pain he never let anyone know about it, "I felt like I could have gone to the hospital, but I knew if I had to go then the crew would have to go home, and not get payed for the time, so I stuck it out."

Likewise on the set of "Rodan" a cable snapped while Nakajima was inside the monster's costume suspended some 10-meters above the sound stage, "The cable broke and I began to spin wildly before the whole thing gave way and I came crashing to the ground. Luckily the costume had wings and I landed in the water which protected me."

Tsuburaya was very pleased to see that Nakajima was okay stating, "I'm glad that you didn't die."

Puppets also prove useful in aiding forced perspective. In Mothra vs. Godzilla (1964), for instance, distant shots of Godzilla moving across the landscape were shot with a puppet. As it was about half as tall as a person, it helped forge the illusion that Godzilla was extremely far away when placed toward the far reaches of the set—something which wouldn’t have worked as well with the man-sized suit. The climax of Destroy All Monsters (1968) employed tiny duplicates of Manda, Baragon, Varan, etc. never meant to participate in the battle with King Ghidorah but simply to provide background motion while simultaneously aiding the illusion of distance.

But perhaps no other Japanese special effects artist has defined the wonders of wired puppetry as proficiently as Sadamasa Arikawa. A former cameraman for Tsuburaya, Arikawa more or less took over as Toho’s effects director in the mid-1960s, as his mentor began shifting focus to television projects at his own company. In terms of wire work, Arikawa’s magnum opus is Son of Godzilla (1967), with its assortment of giant praying mantises and a colossal spider, all portrayed with intricate marionettes. In particular, the giant arachnid Kumonga steals the show, its eight jointed legs in constant motion (each leg operated by multiple puppeteers perched in rafters above the set).

Another standout moment in Arikawa’s résumé is the serpent-like Manda (also a marionette) wrapping its coils around a monorail bridge in Destroy All Monsters (1968) before crushing the structure under its might. Scenes such as this required Arikawa and his crew to test their ingenuity. The usual overhead wires would only handle part of the task, so in order to get Manda to crawl over and underneath and then back around the bridge, the puppet was rigged to several wires, the various directions (above, sideways, etc.) changing according to the shot. Edited together, the results are absolutely astonishing.