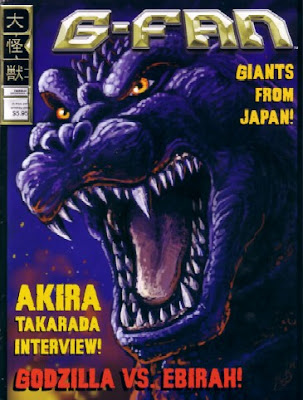 by Ryan Clark with additional notes by Armand Vaquer

Since I haven't received the current issue of G-FAN (#87) as of yet, I haven't been able to do my usual summary. However, Ryan Clark received his issue and he sent me his summary. I am happy to post it here. Thanks, Ryan!

Godzilla Takes A Holiday: Godzilla vs. the Sea Monster Retrospective by John LeMay

Dracula vs. Godzilla: A Tale of Two Studios by John LeMay

Gfantis: Heart of the Beast! by Matt Frank and Daniel Arias-Maduro

Note: J. D. completely forgot to include the photos of Haruo Nakajima at the new Godzilla statue at Toho Studios with his Mangled Skyscraper Award (hey, it happens). He promised that they will be included in issue 88 (summer issue) along with an interview and a DVD review Brett Homenick completed and an interview that I completed. There just wasn't enough room due to the Famous Monsters (the format didn't allow for much text) salute and other goodies.

Additional Note: On G-FEST XVI, I was able to negotiate a special arrangement for the movie screenings with Toho (sometimes having friends in high places comes in handy!). J. D. will make an announcement when everything is finalized. Fans will be very pleased as this will make Kenji Sahara's G-FEST appearance much more memorable!
By Armand Vaquer - April 08, 2009