The First Publicity Stills From The Bloody Rage Of Bigfoot 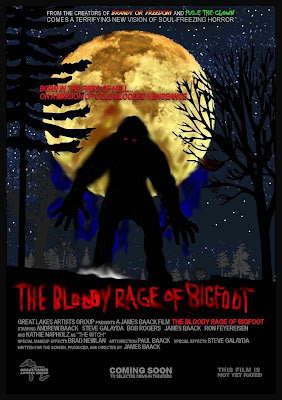 James Baack has really struck a nerve with his 3D monster flick "The Bloody Rage of Bigfoot." The monster movie fans are blazing up his e-mail wanting to know more about the film, while actual Bigfoot researchers have been less than friendly. Though the reaction has been mixed, Baack is just siting back and enjoying the ride.

The director explains, "I cannot believe the e-mails that I've been receiving since the teaser trailer went live. It's hilarious! All these fanboys are asking when it's coming out and I'm also receiving nasty grams from Bigfoot research organizations and study groups! I LOVE IT!"

Although Bigfoot can't be seen in that teaser trailer, the images that are shown, were a bit confusing. A pissed off clown, scared kids, fireworks......not what was expected.

After I voiced my confusion over the trailer, James Baack posted this explanation, "This movie: "The Bloody Rage of Bigfoot" will be unlike anything you have ever seen before. It does not follow any traditional formula used in any prior horror film. The story is told through the eyes of a psychotic and deranged person in a clown suit that calls himself Puss-E. He is befriended by an evil witch that conjures up a horrific demon that later does battle with Bigfoot in a automotive junkyard during a thunderstorm. The film contains tons of blood, explosions, and action. The scene in the trailer with the two people wearing gorilla suits ARE NOT BIGFOOT. That will all be explained. I guarantee that everyone will enjoy this film once completed."

After reading that, I was more than a little relieved. I was under the impression that Bigfoot was going to be nothing more than a guy in a cheap gorilla suite running around scaring old ladies and grade school kids.

Baack explains further, '"Great Lakes Artists Group" promises to deliver a film unlike any other before in it's genre.We will release a film to audiences that will be defined as the purest form of Horror. It will contain nightmarish images combined with a story that leans towards the bizarre and disturbing. We refuse to fall into a category of film that has been shown to fans numerous times over and over. This will NOT be attired mad slasher movie or zombie flick.We like to think that our audience is just as intelligent as we are and will bring to the table a new staple in horror that will set the standards for future horror films to come.I think that fandom has grown tired of the same old formula over and over.Our mission is to present a film that will get into your mind and find out whats going on in there.We will NOT let you down!"

Looks like we are all in for one hell of a ride with this one!

Here are the first publicity stills from "The Bloody Rage of Bigfoot" : 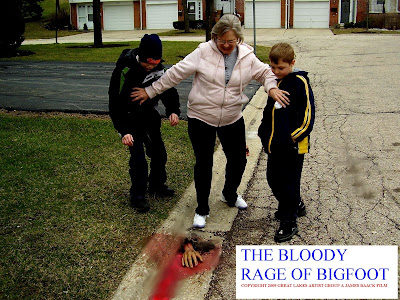 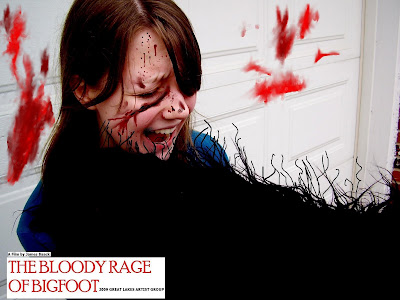 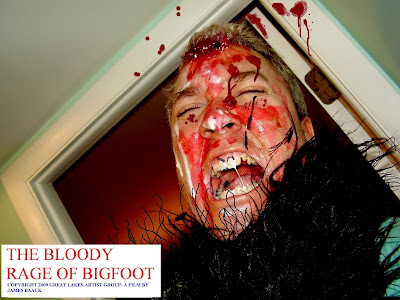 See Also: The Bloody Rage Of Bigfoot Trailer And Teaser Poster / James Baack Is Conjuring Up A Bloody Bigfoot Movie In 3D
Bigfoot Discovered In Windows 7 Wallpaper? / A Close Encounter With Bigfoot - Highway 180 - Arizona / Soviet Scientists Still On The Trail Of Bigfoot / New Photos From Shawn Hunt's Bigfoot Horror The Shrieking / The Legend Of Boggy Creek (1972) / Has A Good Bigfoot DNA Sample Finally Been Found? / A Team Lead By A Russian Priest Search For Bigfoot In Siberia / Allyson Mitchell Believes The True Symbol Of Female Brains And Sexuality Is.....Sasquatch? / Does The RCMP Have A Bigfoot On Ice? / Sci Fi Orders Another Season Of Destination Truth / If Your looking For Ghosts Go To The Aokigahara Forest In Japan / Cryptozoological Figure Set / Southeastern Ohio Society For Bigfoot Investigation Holds Meatings To Discuss Sightings / Are Russian Female Bigfoot Looking For Human Mates? / Bigfoot Stalking Mormons In Houston / Nasa Photo Shows Human-like Figure On Mars / Another Knucklehead Comes Forward To Claim That He Created Pattersons Bigfoot / Recent Reports Lead To The Possibility Of A Large Bigfoot Population Near Houston BC / Monster Quest Is In Colorado Searching For Bigfoot / The Sci Fi Channel Travels Into The Unknown With Unexplained With George Noory This Month
By Ken Hulsey - April 08, 2009