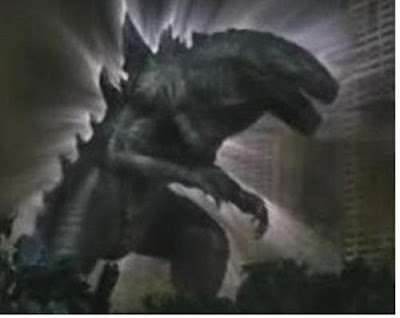 Many of us Godzilla movie fans look back at Roland Emmerich's 1998 re-envisioning of the classic Japanese movie monster and shake our heads. There was so much potential there. We often wonder why Tristar would opt to try and re-invent the monster, that is loved world-wide, instead of going with an American made film that featured the Japanese Godzilla? They had a perfectly good script along those lines in hand, yet they went another direction.

The rest is history, the new Americanized "Godzilla" was released upon us all. After a strong opening weekend, the film fizzled at the box office. Though the film didn't make as much as anticipated, it did bring in over $100 million, and rumors of a sequel began to be floated about. Those rumors soon faded and after a successful stint as a children's animated feature, GINO (Godzilla In Name Only), disappeared out of site only to make a brief appearance in the 2004 film, "Godzilla: Final Wars", where it got a proper ass-kicking from the 'real' Godzilla.

Though it has been over ten years since GINO ran like a track star through the streets of New York, there was always a chance that the monster may once again return, and like the people of Japan, we monster movie fans have lived in quite fear, hoping that the day would never happen.

Director Roland Emmerich has a new disaster film that he is about to unleash on the world, called "2012", and Movies Online interviewed him about the the film and his past projects. After talking quite a bit about "2012" interviewer Sheila Roberts brought up "Godzilla" and this is what Emmerich had to say:

Q: Godzilla is coming to Blu-Ray. What are your feelings about Godzilla today?

Roland Emmerich: I’m totally proud of Godzilla. I’m always saying this. I mean, I know there’s a lot of naysayers, but I’m proud of it.

Q: You had a great idea for a Godzilla remake at one point. Is that dead?

Roland Emmerich: That’s dead. I’m not a person for sequels. I just want to do something original. Once in awhile I plan or try to do something like a remake but then most of the time original stories just win out. And it has to be a good one.

If Emmerich is true to his word, then we have seen the last of GINO. Godzilla fans can now rest easy.