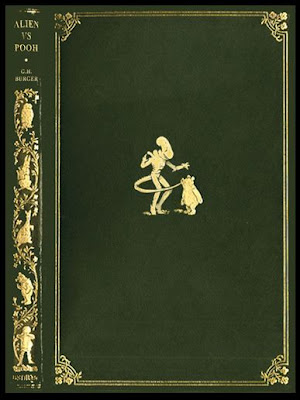 I had so much fun doing yesterday's article, 'Japanese Uber Geekdome - Godzilla Related Cosplay & The Return Of The Life-Sized Gundam ', that I thought that I would give it another shot by combining some interesting stories from around the net.

It seems that something unearthly has landed in the "Hundred Acre Wood" in G.H. Burger's online creation, "AVP: Alien vs. Pooh".

No, its not a story about "Alien" vs feces, though, with all the weirdness on the Internet, you could honestly assume that.

It is actually about what would happen if a Xenomorph from the movies was interjected into the world of A. A. Milne's "Winnie-the-Pooh" children's stories.

As you know, good ol' Pooh is the curious type, so he ends up with a 'face-hugger' alien attached to his snout, then it just gets weirder from there. Actually, I should say that it gets 'funnier' from there......in a twisted sense of humor sort of way.

Check out the fully illustrated story at AVP: Alien vs. Pooh. 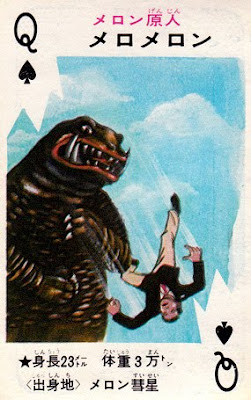 Next, I was delighted to find these images of Pachi Playing Cards from Japan. Each card has a wonderful image of a giant monster on them.

There wasn't any info included along with these images, but I think that is safe to assume that they are of a 60s, or early 70s vintage from the look of them.

Just check out the one to the left. It looks like Gamera is standing idly buy, as a guy falls off a cliff. Or, is Gamera throwing the guy?

It doesn't matter, the image is fun anyway.

Most of the images seem to be of Ultraman, and his enemies, or should I say, facsimiles there of.

You have to really hand it to the Japanese, and their monster loving ways.

Only problem is, if you are playing poker with these bad boys, and ya get dealt the queen of spades, Gamera busts in and throws you off a cliff.

A different country with different rules for cards. The game is called 'kaiju hold em', in case your curious. 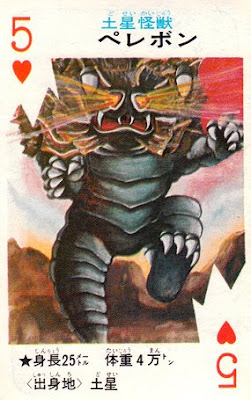 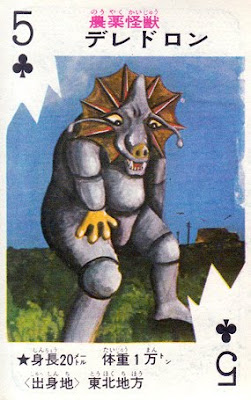 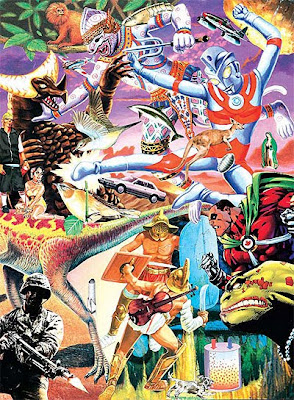 Lastly, I would like to bring to your attenetion the work of Thai artist Sethapong Povatong.

As you can see Povatong loves to make collages, mostly from images that he finds in children's encyclopedias, children's books, comics, advertisements, as well as modern video game and men's magazines.

Povatong's works have colorful titles like, "Die! You Monster", "Kinky Barber" and "Have Sex, Not War", and feature such bizarre images as The Terminator at a medieval banquet and Darth Vader at the sinking of the Titanic.


As you can see from the image provided, the young artist has a love for "Ultraman" and has included the Japanese superhero in many of his creations.

Hey say what you will about this type of art, but anything that includes giant monsters, gladiators, comic book heroes, soldiers, cars.....um....the tail end of a dinosaur.......um.....a Polynesian bikini girl....the Virgin Marry......a kangaroo....a WWII German jet fighter and a monkey (did I miss anything?) is cool in my book.

Let me leave you with an image of Pooh and Piglet as the go in search of Owl and Rabbit to see if they can help remove the "Alien" from the honey loving bears grill. 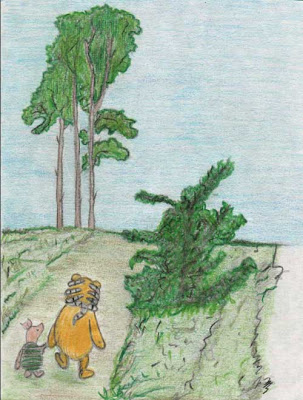