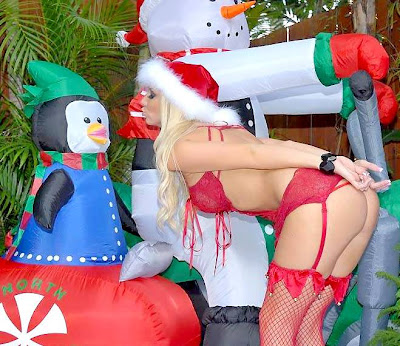 Okay, I know that this is probably not an appropriate article to be writing on "Christmas Eve", and as a Christian I should be ashamed of myself, but, this story is just to weird to pass up.

The "Raelian Movement" believe that mankind has developed a taste for violence, while love and pleasure has become taboo. "It should be the other way around. Several years ago an Iraqi boy whose limbs were amputated was shown on TV and everybody treated this as if it was okay, but when Janet Jackson exposed her breast during the Superbowl the American nation was appalled.

"We wanted to put into practice the saying 'make love, not war'"

According to Drori the UFO based religion has some 70,000 members worldwide, "We don't believe in demons, ghosts and gods," he explains. "The group's primary goal is to inform humanity, without attempting to persuade, regarding scientific messages that deal with the origins of life on earth.

"The second goal is to expedite the establishment of a society based on the principles of non-violence, solidarity, self-fulfillment and pleasure. To establish one global currency, one global government and harness science to the service of humanity, and not against humanity," he concluded.

See Also: Another UFO Photographed Over The UK / UFO Case Files - The Best Of 2007 - Archives / The Hertford Fireball - Asteroid Or UFO? / UFO Light Show Over Suffolk / Discovery To Air UFO Hunters Footage Sci Fi Found Too Shocking / Does Mars Have Wood? / Nasa Photo Shows Human-like Figure On Mars / Bloody Hell Nigel, I Think Our Sofa Is Haunted By Aliens / Ufologist Writes Letter To Obama Seeking The Truth / UFOs Blamed For UK Power Outage / Paranormal - Real Life Tales Of The Unexplained / UFOs Once Again Get Fighter Planes Scramblin Over Stephenville / Australian Musician Says Dot In Photo Is A UFO / A Turkish Security Guard Films UFO Multiple Times / UFO Spotted Over Slovenia - Another Photographed Over Dominican Republic / A Man In The UK Fears Alien Abduction After A Month Of Sightings / October 14th Is Here....And Surprise! No Aliens! / Aliens To Show They Are Real In The Skies Over Alabama
By Ken Hulsey at December 24, 2008