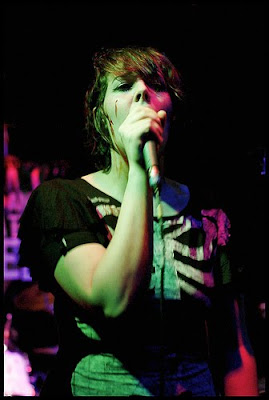 Keeping in line with my new feature about bands that are really "lighting my fire" these days comes today's entry on the Liverpool (UK) based Zombina and The Skeletones. The Skeletones are an amazing group that takes a tongue-and-cheek musical journey into everything that makes classic horror and sci fi so great. Listen to these titles, Staci Stasis, Frankenlady, Nobody Likes You When You're Dead and for you Japanese sci fi fans, Astroboy.

Here is their bio from Wikipedia:

Zombina and the Skeletones are a horror rock band from Liverpool, England, formed in 1998 around the nucleus of vocalist Zombina and songwriter Doc Horror. The majority of their tongue in cheek lyrical content deals with themes of horror and science fiction, yet their musical style is upbeat and pop oriented, with elements of garage punk, doo wop and hard rock. Due to their apparent obsession with B Movies and black humour their fanbase extends to the gothic rock, deathrock and psychobilly scenes.

Zombina met Doc Horror in 1998, fast becoming friends and started a band called The Deformed, producing a demo tape; "No Sleep 'Til Transylvania", in early 1999. This tape featured songs that would later become Zombina and The Skeletones staples; "The Grave... And Beyond!", "Braindead" and "Leave My Brain Alone"; and established a strong B-Movie informed horror theme recalling the early efforts of The Misfits and The Cramps.

In 2005, Zombina and The Skeletones were a featured unsigned band on BBC Radio 2. They have also toured the UK with bands such as The Damned, The Misfits, and The Meteors.2006 saw the band headlining Lumous Gothic Festival, Finland. Then in 2007, Wave-Gotik-Treffen (Wave-Gothic-Meeting) in Leipzig, Germany.They have been featured in the UK magazine, Bizarre, and played live at the 2008 "Bizarre Ball" in London. They were scheduled to appear at Abertoir, the Welsh Horror Festival, and performed as part of the festival. 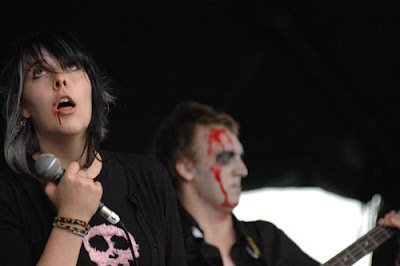 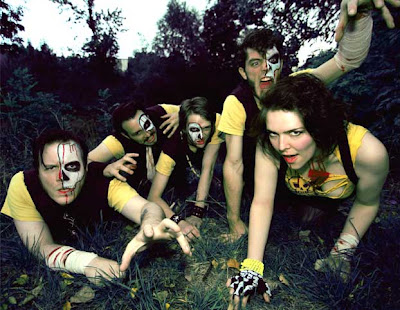 Remember what I always say?
That I'd rather lie down and die than let you fly away
But now you've gone and thrown away all our dreams
Just remember, out in space, nobody can here you scream

See Also: Kitty In A Casket - Monster Music Profile / Horrorpops - Monster Music Profile / The Debut Of Celeste Cartier & Menage A Trois / Cuties For A Cause Blows The Elephant's Roof Off! / THE CHEETAH WHORES Score A Hit For SHARKTOPUS And SyFy / Godzilla Invades The Indie Rock Scene - "Lizard Song" By VIA AUDIO / Lita Ford Is Back - And She Wants To Know Your Wicked Fantasy / Just In Time For Halloween - New Monsterous Music From Prof. Morte And The Silver Scream Spookshow / KISS Celebrates 35 Years In Music With A Sonic Boom / New Hot & Sexy Photos Of Chase Masterson / The Yeah Yeah Yeahs - Heads Will Roll / It's Hot Rod Girls And Rat Rod Rockers To The Rescue!
By Ken Hulsey at April 28, 2011