Fans Are Given A Rare Chance To Visit The Sets Of Doctor Who, Torchwood, And Sarah Jane 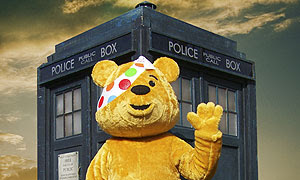 Fans of smash-hit shows Doctor Who, Torchwood and The Sarah Jane Adventures are being offered a once-in-a-lifetime opportunity to go behind the scenes at the studios where the shows are filmed.

On Saturday and Sunday, 8 and 9 November, the BBC will be opening the studio doors just outside Cardiff to 100 lucky competition winners and their friends and families.

The money-can't-buy-experience is being run to help raise money for this year's BBC Children in Need appeal.

Doctor Who: Backstage will take fans to the heart of the action at the BBC Wales studios.

Visitors will tour the closely-guarded sets, come face-to-face with some of the Doctor's mortal enemies, and meet the behind-the-scenes teams who make it all happen – including the set designers, costumiers and make-up artists.

Russell T Davies says: "This is so exciting – giving fans the opportunity to take a behind the scenes look at where we film Doctor Who, Torchwood and The Sarah Jane Adventures is just brilliant.

"It'll be the perfect opportunity for the whole family to experience something unique and truly extraordinary. It will be a once-in-a-lifetime experience – and the best thing is that all the money raised will go towards BBC Children in Need."

To be in with a chance of winning a place on the tour, all people have to do is answer one multiple-choice question.

The all-important question will be announced on Friday 26 September, live on the Chris Moyles show on BBC Radio 1 and on BBC Radio Wales and BBC Radio Cymru.

It will also be available on the Doctor Who website – bbc.co.uk/doctorwho – along with the full terms and conditions.

The competition phone lines will be open from 8am on Friday 26 September 2008. Callers must be over 16 and have the bill-payers' permission. Each winner will be able to bring up to three guests who must all be aged five or over.

The tour is taking place during a brief gap in the production schedule.

Doctor Who will return to BBC One this Christmas in The Next Doctor and filming resumes early in 2009 on a number of specials, followed by series five.

BBC Children in Need's aim is to positively change the lives of disadvantaged children and young people in the UK.

The 2008 BBC Children in Need television show is on Friday 14 November.

This year's fundraising theme is "Do Something Different" and in the weeks and months leading up to the televised appeal people are being encouraged to get creative and take up the challenge.

For inspiration there are lots of fantastic ideas in the new fundraising pack – go to bbc.co.uk/pudsey or call 0345 607 3333.