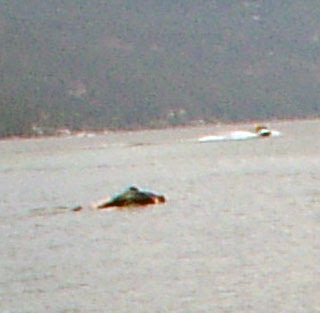 Is it possible that the crew of the popular television series, "Monster Quest", has actually found a real monster?

The production team for "Monster Quest" has just completed a nine day location shoot at Okanagan Lake, the home of Canada's own version of the "Loch Ness Monster", known as Ogopogo.

The crew went as far to mount a thermal infrared imaging camera on a helicopter and fly over the lake. It picked up an unidentified shadow on the water, while sonar spotted something over three metres long moving in the depths.

Now, that is some really good evidence that there may be some sort of living dinosaur in Okanagan Lake, but the real "pay-off' came when divers discovered a strange specimen in an underwater cave.

The History Channel, which produces the "Monster Quest" program, had tried very hard to keep their crew's discovery a secret, but it soon leaked out that the team had possibly discovered a baby Ogopogo.

The specimen has been shipped off to the University of Guelph in Ontario for DNA tests, and presently nobody has been willing to go as far to label it a genuine discovery.

Bill Steciuk, a monster hunter who aided the television crew, got a chance to see the mysterious find and described it like this, "It was all curled up. The features were really hard to see. You could see a little head tucked in and a straight tail with no fins. It's a huge mystery. We have no idea what it is."

"I couldn't recognize it," said Steciuk. "Nor could anyone else. Maybe a new species has been found."

Arlene Gaal, who has written three books on the legendary Ogopogo, was shown a photograph of the alleged baby monster. Her opinion of the evidence was a little more skeptical, "The Ogopogo is real, but I don't know what this is."

"I had my doubts when the crew presented me with their findings. It looked to me like a decomposing ling cod."

Whether the specimen is a decomposing fish or a genuine lake monster infant, it is certain that the folks over at the History Channel are going to keep a lid on the test results until the episode on Ogopogo airs in February.

It's better for ratings that way.

See Also: Monster Quest Is In Colorado Searching For Bigfoot / The Sci Fi Channel Travels Into The Unknown With Unexplained With George Noory This Month / Russian Soldiers Discover A Harry Monster On The Beach / A Mysterious Creature Washes Ashore In New London Connecticut
By Ken Hulsey - November 12, 2008