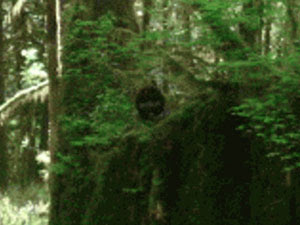 
Don't you think that it is just a little fishy, that a Canadian crytozoologist was able to snap a photograph of a Sasquatch (Bigfoot) near Vancouver during the 2010 Winter Olympics?

As most of you probably know, Sasquatch is the official mascot of this years Olympics, so it was awful convenient that Randy Brisson, a well-known local cryptozoologist, was able to snap a picture of one at this particular time, at this particular location.

Amazingly, Brisson didn't go to the Canadian press with his photograph, but instead sent it to fellow researchers Igor Burtsev and Dmitry Bayanov, the directors of the International Center for Hominology, in Russia.

In the letter that accompanied the alleged Sasquatch photograph, Brisson told his Russian colleagues that he and his son Ray had discovered some Sasquatch footprints in the snow along a logging road. The prints reportedly were of a large adult and possibly a couple of younger children.

While examining the tracks, the pair realised that they were being watched. That is when Brisson saw the Sasquatch looking at them from behind a tree.

The alleged Sasquatch reportedly began to throw stones at the pair, to get them to leave.

The location of this encounter, according to Brisson, was in the woods near Pitt Lake, which is a quite a distance from where the Olympics are currently being held.

Now I don't know about you but Brisson's Sasquatch looks a little too much like a guy in paintball gear to me. Either that or this critter has one hell of a beard.

Dan Haggerty would be proud of that beard......you know "Grizzly Adams"? Okay, now I feel old.

Whatever, anyway, I don't really think that the object in this pic looks like Bigfoot, at least not like the Bigfoot I saw, and I do find it suspicious that Brisson was able to take a photo of the Olympic Mascot, while the Olympics are still going on.

My dollar is on publicity stunt.

See Also: Virginia Bigfoot Sightings On The Rise? / Its Werewolves vs Bigfoot In Clint Romag's 'Revenge Of The Werewolves' / A Curious Bigfoot Caught On A Thermal Camera In North Carolina / The Meyer Brothers Turn "The Legend Of Grassman" Into A Feature Film / The Monster Mash - Giant Crabs, Zebra Girls, And Yes.....Another Bigfoot Movie / Giant Fossilized Human Tracks In The Paluxy Riverbed Prove The Existance Of Bigfoot? / New Evidence Of The Bloody Rage Of Bigfoot / Bigfoot Photos From Bulgaria, Really From Burbank / Albino Bigfoot Caught Sneaking Around Pennsylvania? / Did The 'Real' Bigfoot Make His Big Screen Debut In "Great North?" / MOMO - Bigfoot Crossed With The Headless Horseman / Here Comes The First Monster Sighting of 2010 - The Maine Tree Creature / Bigfoot Caught On Trap Camera In Minnesota......Maybe? / Was Bigfoot Caught On Tape In Pennsylvania? / James Baack Overcomes All Hurdles To Complete 'The Bloody Rage Of Bigfoot' / Tom Biscardi Brings A Film Crew To West Virginia To Find Bigfoot / Another Reason To Not Wander Around In The Woods At Night - Wes Sullivan's 'Nightbeasts' / Hunting For Monsters And Other Unexplained Mysteries In My Own Backyard / 'Savage' To Premiere At Horrorfind Weekend In Maryland / The Bloody Rage Of Bigfoot - Two Hot Girls On A Motorcycle / Baack's Hardcore Bigfoot Babes....With Guns! / The Bloody Rage Of Bigfoot - Censored For Your Protection / A Close Encounter With Bigfoot - Highway 180 - Arizona
By Ken Hulsey at February 25, 2010