A Godzilla Plush Doll For All You Little Monsters 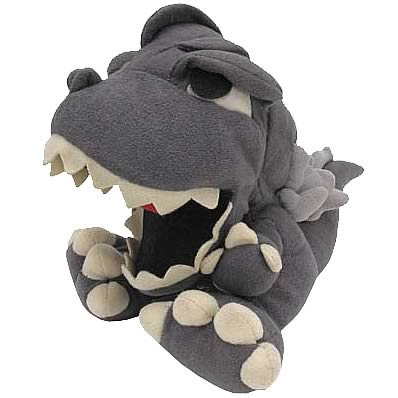 Cuddle The King of the Monsters For Only $14.99
(Click Here For More Info)

Grrr Godzilla Plush. This cute version of Godzilla isn't quite as loud and dangerous as Godzilla himself, and thus can only Grrrr instead of growl. Such cute eyes, he's designed in actual Japanese Chibi style by a Japanese plush designer. Limited Edition. 9-inches long.

Godzilla is the main character of all of the Godzilla films, though there are numerous different versions of the monster. The silver screen is not the only place Godzilla has appeared; there have been literary sources that have expanded the universe of Godzilla. The Godzilla universe, and the character itself have also starred in comic books, manga, Japanese television and many cartoons.

The first film was simply titled Godzilla. In this movie, Godzilla was portrayed as a terrible and destructive monster. Following the success of Godzilla, Toho started filming a sequel. In this sequel film, a second Godzilla was set up to fight another giant monster, named Anguirus. This second film started a trend for Godzilla movies, where Godzilla would fight other giant monsters. In this film as well, Godzilla was portrayed as a villain. This portrayal would continue for two more movies. In his fifth movie, Ghidorah, the Three-Headed Monster, Godzilla took the role of a hero. From that point onto the end of the Showa series, Godzilla stayed a hero, protecting Japan against attacks from other monsters, aliens, etc. At one point, Godzilla even adopted a son, Minilla, in Son of Godzilla, who would make appearances in later Showa-era films.