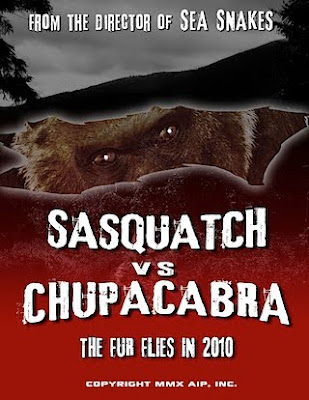 Okay, enough with the Bigfoot movies!

Do you know how many Bigfoot related horror movies are in production right now? Six....well seven, including this one, that I can think of.

Now the dynamic film making duo of Fred and Kimberly Ray are joining the frey with "Sasquatch vs Chupacabra", which, surprisingly, is a monster-on-monster battle film no one else thought of first.

If there are two types of 'trendy' films in the independent horror movie biz these days, they are "Bigfoot" movies, and "versus" movies, and the Ray's have figured out how to combine them both together in one neat little package.

Two of cryptozoology's greatest stars, going at it toe-to-toe.

Like I said before, I'm surprised somebody hadn't come up with the idea a long time ago?

So far, there isn't any news on a cast or plot, but Ray promises to keep us updated.

I would like to take this time to announce my very own line of films, before anyone else thinks of them, "Yeti vs The Loch Ness Monster", "Champ vs Ogopogo" and "Skunk Ape of the Bermuda Triangle."

I'm planning on getting right to those after I'm finished with "The Jersey Devil x Mothman x Yowie: Tokyo S.O.S.", which Isn't as much a horror film as a romantic comedy.

See Also: New Toy Tuesday! A Sexy Princess, Ash, Bigfoot, The Mummy And The Starship Enterprise / Two New Clips From Jordan Blum's Bigfoot Horror, 'Savage' / 'Savage' To Premiere At Horrorfind Weekend In Maryland / The Bloody Rage Of Bigfoot - Preview Clips, Nasty Church Letters And Sequel News / The Bloody Rage Of Bigfoot - Behind The Scenes Shots / The Brand-New Teaser Trailer For Brian Jaynes 'Boggy Creek' / “The Legend of Boggy Creek” Director Charles B. Pierce Dead At Age 71 / And Yet....More Photos From 'The Bloody Rage Of Bigfoot' / Cryptozoological Crazyness - Bigfoot An Escaped Slave - Possibly Has Bone In It's Penis / Vancouver Sasquatch Photo The Real Deal Or Publicity Stunt? / Virginia Bigfoot Sightings On The Rise? / Its Werewolves vs Bigfoot In Clint Romag's 'Revenge Of The Werewolves' / A Curious Bigfoot Caught On A Thermal Camera In North Carolina / The Meyer Brothers Turn "The Legend Of Grassman" Into A Feature Film / The Monster Mash - Giant Crabs, Zebra Girls, And Yes.....Another Bigfoot Movie / Giant Fossilized Human Tracks In The Paluxy Riverbed Prove The Existance Of Bigfoot? / New Evidence Of The Bloody Rage Of Bigfoot / Bigfoot Photos From Bulgaria, Really From Burbank / Albino Bigfoot Caught Sneaking Around Pennsylvania? / Did The 'Real' Bigfoot Make His Big Screen Debut In "Great North?" / MOMO - Bigfoot Crossed With The Headless Horseman / Here Comes The First Monster Sighting of 2010 - The Maine Tree Creature / Bigfoot Caught On Trap Camera In Minnesota......Maybe? / Was Bigfoot Caught On Tape In Pennsylvania? / James Baack Overcomes All Hurdles To Complete 'The Bloody Rage Of Bigfoot' / Tom Biscardi Brings A Film Crew To West Virginia To Find Bigfoot / Another Reason To Not Wander Around In The Woods At Night - Wes Sullivan's 'Nightbeasts' / Hunting For Monsters And Other Unexplained Mysteries In My Own Backyard / 'Savage' To Premiere At Horrorfind Weekend In Maryland / The Bloody Rage Of Bigfoot - Two Hot Girls On A Motorcycle / A Close Encounter With Bigfoot - Highway 180 - Arizona
By Ken Hulsey at April 19, 2010