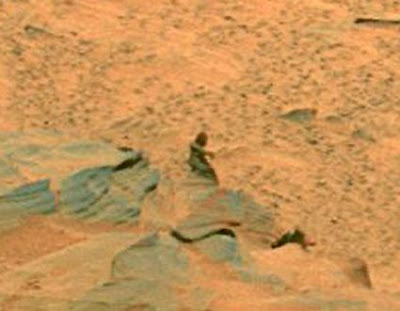 Is this the photo of a real Martian? Is a Bigfoot? Is it some other form of alien life? Is it a rock? Nobody knows!

According to NASA this photo was taken by the Intrepid Spirit Rover on the edge of Mars’ Gusev crater back in November of 2004. The image appears to show a human-like figure climbing down a rocky slope. NASA, however, hasn't made any comment on the image which was posted on their website Wednesday.

Apparently the British media went nuts when the image became public, suggesting that it was proof of life on Mars. A lot of people have been coming forward with their opinion of just what they think is in the image. Some say it's Bigfoot, some say a Wookiee, others see a naked green woman. I just happen to think it looks like a Tusken Raider.

Whatever it is, it makes for great conversation.

Hey, the next thing you know, Philip Morris will be on TV claiming that he made a "Neanderthal" costume for NASA.

See Also: Another Knucklehead Comes Forward To Claim That He Created Pattersons Bigfoot / Recent Reports Lead To The Possibility Of A Large Bigfoot Population Near Houston BC / Monster Quest Is In Colorado Searching For Bigfoot / The Sci Fi Channel Travels Into The Unknown With Unexplained With George Noory This Month / Recent Bigfoot Sightings In BC Suggest Bear-Like Migration / Bigfoot Prints Found In Siberia / Russian Soldiers Discover A Harry Monster On The Beach / Ufologist Writes Letter To Obama Seeking The Truth / UFOs Blamed For UK Power Outage / Paranormal - Real Life Tales Of The Unexplained / UFOs Once Again Get Fighter Planes Scramblin Over Stephenville / Australian Musician Says Dot In Photo Is A UFO / A Turkish Security Guard Films UFO Multiple Times / UFO Spotted Over Slovenia - Another Photographed Over Dominican Republic / A Man In The UK Fears Alien Abduction After A Month Of Sightings / October 14th Is Here....And Surprise! No Aliens! / Aliens To Show They Are Real In The Skies Over Alabama
By Ken Hulsey at November 21, 2008