If You Spot A UFO Don't Contact Your Air Force Recruiter 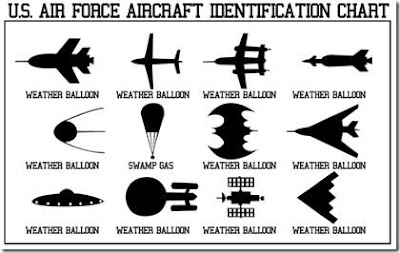 A man left a string of messages on a Myrtle Beach Air Force recruiting offices answering machine on Christmas Day to report that he had seen a UFO and its extraterrestrial occupants. The caller, who identified himself as the son of a US Army tank commander, said he was trying to reach the "Air Force UFO Division".

On Monday a female recruitment officer discovered the numerous messages and contacted the Myrtle Beach police, who in turn contacted the man and instructed him not to harass the office anymore.

The police report on the incident noted that the caller sounded confused and somewhat incoherent on the recorded messages.

This is a lesson that everyone should learn. If you are mentally unstable or you have had a few, and you think that you are seeing something weird, then you should probably just go to bed and get some sleep. If you really have to tell someone, then contact your nearest Air Force base and ask for the people in charge of "Project Blue Book." If that doesn't work then contact the FBI and ask for agents Mulder or Scully.

See Also: UFO Cult Cancels Mass Orgy / Another UFO Photographed Over The UK / UFO Case Files - The Best Of 2007 - Archives / The Hertford Fireball - Asteroid Or UFO? / UFO Light Show Over Suffolk / Discovery To Air UFO Hunters Footage Sci Fi Found Too Shocking / Does Mars Have Wood? / Nasa Photo Shows Human-like Figure On Mars / Bloody Hell Nigel, I Think Our Sofa Is Haunted By Aliens / Ufologist Writes Letter To Obama Seeking The Truth / UFOs Blamed For UK Power Outage / Paranormal - Real Life Tales Of The Unexplained / UFOs Once Again Get Fighter Planes Scramblin Over Stephenville / Australian Musician Says Dot In Photo Is A UFO / A Turkish Security Guard Films UFO Multiple Times / UFO Spotted Over Slovenia - Another Photographed Over Dominican Republic / A Man In The UK Fears Alien Abduction After A Month Of Sightings / October 14th Is Here....And Surprise! No Aliens! / Aliens To Show They Are Real In The Skies Over Alabama
By Ken Hulsey at December 31, 2008