Can A Werewolf, Vampire And Ghost Share A London Flat? 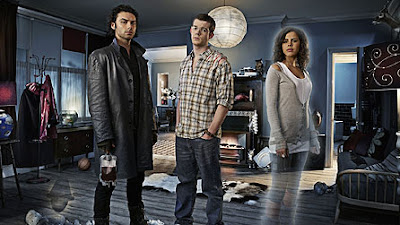 Following the lives of the twenty-somethings and their secret double-lives, as a werewolf, vampire and ghost, Being Human was first transmitted in February 2008 as a 60-minute special as a part of BBC Three's drama pilot season.

Popular with viewers and critics alike, the pilot peaked at nearly 450,000 viewers whilst gaining rave reviews and online petitions begging for a series to be commissioned.

Russell Tovey reprises his role as the lovable George, battling with his double identity as a mild-mannered and geeky hospital porter who for one night a month is transformed into a flesh-hungry, predatory werewolf.

Aidan Turner plays the good-looking and laid-back Mitchell who, in contrast to George, has the gift of the gab and an easy confidence with the ladies. But he is also a blood-sucking vampire struggling with going cold-turkey from the blood he craves.

Completing the flat-share trio is Annie, played by Lenora Crichlow, a talkative ghost lacking in self-confidence and desperate for company. Annie is still pining after her fiancé, whom she was due to marry before the fatal accident that left her with her ghostly affliction, and who happens to be the landlord of their flat.

The series follows the trio as they do their best to live their lives as normally as possible despite their strange and dark secrets.

But with unwelcome intruders into their world, rumblings about an impending revolution from the vampire underworld and constant threats of exposure, on top of the usual issues faced by young people surrounding love, work and mates – the only thing they may be able to rely on in their heightened world, is each other.

Julie Gardner, Head of Drama Commissioning, BBC Wales, says: "Being Human uniquely combines the drama and complexity of ordinary life with the heightened excitement of the supernatural world, in a vibrant, witty and compelling way.

"The six-part series sees our twenty-something friends embark on extraordinary journeys as they battle their inner demons and the outside world, and struggle to find out what it really means to be human."

Danny Cohen, Controller, BBC Three, comments: "Being Human touched a nerve with young audiences when the pilot was transmitted. Powerful writing, a strong cast and imaginative direction come together in a really exciting new original drama series for BBC Three."

Being Human is written by Toby Whithouse (Being Human pilot, Torchwood, Doctor Who), produced by Matthew Bouch (The Sarah Jane Adventures, Being Human pilot), directed by Toby Haynes (M.I. High, Spooks Code 9), Alex Pillai (Wire In The Blood) and Colin Teague (Torchwood, Doctor Who), and executive produced by Rob Pursey (City Of Vice, Sold) and Julie Gardner, Head of Drama for BBC Wales.
By Ken Hulsey at December 30, 2008