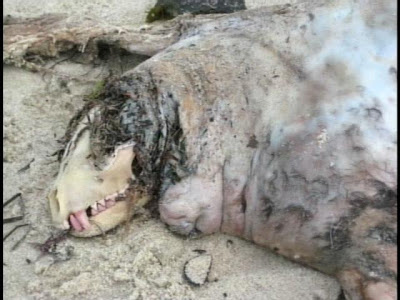 Bobbette Clapsadle and her family were taking their usual evening stroll on the beach , when they came upon the rotting corpse of a creature that they couldn't identify. Just like in just about every case when a giant squid or some other unidentified "sea-monster" washes ashore, there were no samples taken. Not the Clapsadle family would have wanted to cut off a portion of a dead thing they found on the beach, but the authorities weren't contacted about the find, so no concrete evidence was gathered to find out what exactly this thing was. The families daughter did have a camera with her and snapped the above photo, however the shot doesn't show the whole creature, or include any items that would indicate the size of the body.

Other people on the beach also examined the creature, but no one could seem to be able to identify exactly what it was. "We weren't sure at first. It was kind of covered in grass (and) was in the weed line. My son saw it first and was like,'Look at that!' My husband walked over and said, 'Oh my God,'" Clapsadle said.

When the family returned to scene a couple of days later the body was gone. Add this case to the endless stack of reports of mysterious creatures that have washed up on beaches all over the world, where no one will ever know exactly what it was.
By Ken Hulsey at October 03, 2008