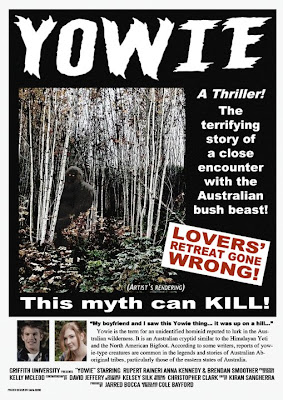 For the last couple of years American independent film makers have caught a major case of the 'Bigfoot Movie Crazies' with at least a dozen movies about the legendary beast being put into production. Now, it seems that the trend has spread across the Pacific to Australia, where low-budget movie maker Cole Bayford has decided to feature the countries own version of Sasquatch in his short film entitled "Yowie".

The film itself is actually a graduate project for the Griffith University Film School: Bachelor of Film and Screen Media Production Program in which Bayford is currently enrolled and is being filmed in actual Yowie country, Springbrook, NSW, a location where the creature has been sighted numerous times over the years.

Bayford had this to say about the project, "The themes in Yowie are of young love, jealousy and the ‘what if’. What would you do if you witnessed a death in the bush? Yowie explores the reality of basic human instincts and reactions. The film showcases the strength of relationships and the importance of communication between people in terror. The story delves into the speed of emotional change and rising paranoia’s effect on decisions.'

Here is the official synopsis:

Deep in the Australian bush, a legend lies dormant. In an effort to rekindle their relationship a couple drives into the hills for a romantic retreat. James and Vivian find themselves caught between a breakdown in their relationship and a fight for survival against a mysterious beast. What seemed like a new beginning is now a terrible encounter with the unknown. After James mistakes Angus, a harmless bushman, for the Yowie, he shoots him dead. The only way they can endure is to find a way to trust each other again, which, in this extreme situation, is easier said than done. Will they survive the night? And if they do, where will they stand after all that’s happened? This myth is deadly… 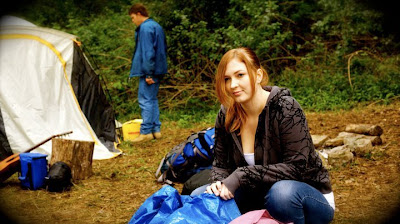 "Yowie", which is being produced by Jarred Bocca and stars Rupert Raineri, Anna Kennedy and Brendan Smoother, may only run for 10 minutes, but it looks as if Bayford has managed to squeeze a big film into a little package.

Bayford adds, “A younger audience and those of all ages who love tension and drama can sink their teeth into this psychological thriller."

Look for "Yowie" to hit the film festival circuit in 2011.

Here is the trailer: